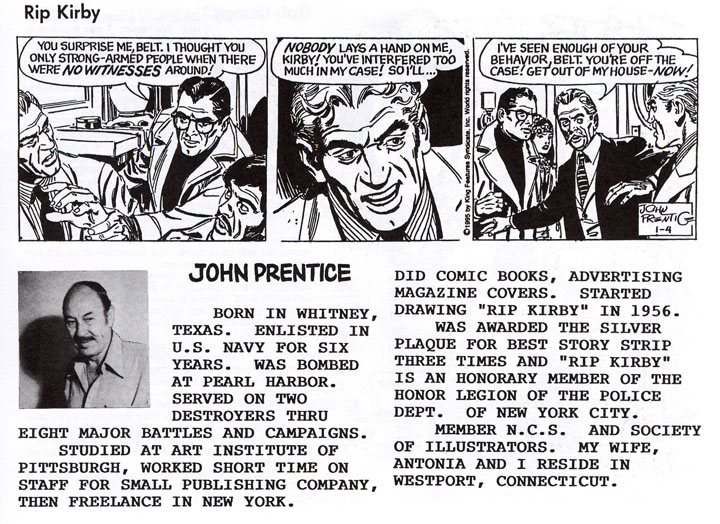 A year before National Cartoonist Society member John Prentice began his 43 year run on the newspaper comic strip, Rip Kirby, he illustrated the story below for Coronet magazine. You can find Prentice’s biographical “sketch” here on the NCS website, but I hoped to find some additional anecdotal material… and Tom Heintjes article about the Johnstone & Cushing studio mentions that around the time that Prentice did these pieces, he and “On Stage” creator Leonard Starr were sharing an apartment while both men worked for J&C. “John and I would cover for each other. [J&C Art Director] Al Stenzel would call to ask where I was with an overdue job, and I would be standing next to John while he told Al that I had left 10 minutes ago to turn in the job. Stenzel would yell, ‘Don’t give me that shit! I know he’s standing right there!’ “ Knowing that my friend David Apatoff is a huge fan of Leonard Starr’s work, I asked him if he might also know some additional details about Starr’s old friend, Prentice. What I never expected was that David would speak with Leonard Starr himself!

So today, thanks to David, we are privileged to have Mr. Starr’s personal recollections of his friend, John Prentice: Johnny and I shared an apartment in Manhattan– it was a dreadful little place– but we were living “la vie Boheme,” making a living as artists (although not a very good one. Whoever received the last check paid for the groceries). We worked for Johnstone and Cushing and other places, but I was shopping around some comic strips to syndicates (including On Stage). Then one day, we got word that Alex Raymond had been killed in a car crash. I received a call from Sylvan Byck, the cartoon editor for King Features. He told me that Raymond had only worked two days ahead, and the syndicate was in a panic.

Could I come right over and take up Rip Kirby where Raymond had left off? I thought about it… Rip Kirby was a sure thing, and it was very tempting, but I decided to take a chance and try my luck with my own strip a while longer. So I told Sylvan, “You don’t want me, but the very best guy in the world for the job is sitting right next to me.” Sylvan responded, “send him right over!” And that’s how Sylvan met Johnny and Johnny got the Rip Kirby strip. It turned out, that same day, the head of the Chicago Tribune Syndicate was on a train reading a newspaper, saw that Raymond had died, and got off the train at the next stop to send me a telegram confirming that I would be doing On Stage for his syndicate. He figured that King Features would be looking for a replacement for Raymond. So Johnny and I each got our strips at the same time, and took off from there.

Johnny was a meticulous artist, and when he started doing Rip Kirby he carefully set up his compositions on tissue paper first. I watched him doing it, and I said, “Johnny, if you don’t start working faster, you’re going to starve to death.” To this day, I still don’t know how he managed it. But those first strips he did were beautiful. Johnny was a Texan, and although he had a very slight build, he had a Texan’s confidence. One day he came outside to find that his car was blocked by a big truck that was double parked. Johnny called up to the driver to move the truck, but the driver said, “my partner will be out in a minute.” Johnny said, “I don’t feel like waiting a minute. You’re either going to move that truck or I’m going to yank you out of there and move it myself.” The driver moved the truck. My thanks to David – and to Leonard Starr for sharing with us these great personal recollections of his friend, John Prentice.

* There is a tribute page to John Prentice at Keefe Studios.com