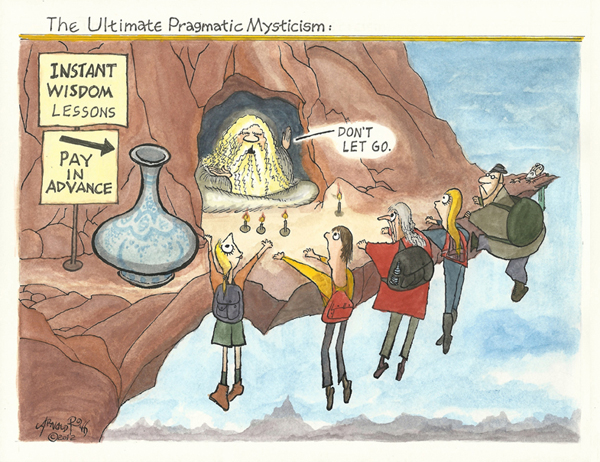 1983 NCS Reuben winner, former NCS president and cartooning/humorous illustration legend Arnold Roth has an exhibit showcasing his 60 plus years of incredible work at the Museum of Comic and Cartoon Art, now housed in the Society of Illustrators, 128 East 63rd St in Manhattan.

Arnold Roth has been a humorous illustrator and cartoonist all his life and, for most of that time, has freelanced, snatching a living by hustling one assignment after another in a highly competitive market, the wolf kept at bay by ingenuity and energy. And talent. And luck, Roth readily admits—even proclaims—lots of luck.

This exhibit highlights work from Roth’s life-long career featuring cartoons from publications such as Sports Illustrated, Esquire, The New Yorker, Playboy, Punch, Southampton Review and many more. For Roth, every drawing represents an artistic challenge as well as a narrative one. “I try to give myself little problems,” he said. “Brubeck, years ago, was on a symposium and somebody asked him, ‘Would you describe what playing jazz is?’ And he said, ‘It’s getting yourself into and out of trouble.’ “I thought that was a good way to put it. If you’re not doing that, you’re really hacking it, doing the same thing over and over. I always want to push it a little.”

A reception will take place honoring Roth and celebrating The Pen-Ultimate Arnold Roth: 60 Years (and Counting) As a Freelance on January 23, 2013 from 5:00 – 10:00pm in the Society’s Hall of Fame Dining Room.

Arnold Roth has been a humorous illustrator and cartoonist all his life and, for most of that time, has freelanced, snatching a living by hustling one assignment after another in a highly competitive market, the wolf kept at bay by ingenuity and energy. And talent. And luck, Roth readily admits—even proclaims—lots of luck. Roth had the luck to be born in 1929 on the cusp of the dawning Great Depression, so he learned the survival value of scrambling for gainful employment while growing up in Philadelphia. He and his older brother shared the same interests and frequented the Philadelphia Art Museum and the Philadelphia Library. They went to exhibitions and shows. Very early, Roth fell in love with jazz and learned to play the saxophone. He also drew pictures and even sold a few.

Upon graduation from high school in 1946, Roth was awarded a full scholarship to the Philadelphia Museum School of Industrial Arts, but he was expelled at the end of two years because he was always arriving late—he was playing sax in jazz bands until the wee hours of the morning and couldn’t get out of bed in time for class. He started freelancing artwork in the summer of 1948, but until the mid-1950s, his saxophone was a more dependable source of income than his pen. In 1952, he started to get lucky: he got in on the ground floor of TV Guide, married Caroline Wingfield and met the Dave Brubeck Quartet, which soon led to assignments doing record album covers. He was selling regularly enough to such magazines as Glamour, Charm and TV Guide, that he was making a living as a cartoonist.

Roth’s big breakthrough came in 1957 when he started working on Trump, Playboy’s satiric magazine, and on Humbug, a more penurious production, both the inventions of Harvey Kurtzman, founder of MAD magazine. For these enterprises, Roth did what he called “pure humor”—ideas executed solely for the sake of comedy and satire. He also began doing illustrations for Playboy and cartoons for England’s Punch magazine, and he sold a cartoon into newspaper syndication.

Called Poor Arnold’s Almanac, it ran for two years, beginning in May 1959. In each installment of the Almanac, the opening panel announced the topic for the day, and Roth played variations on the theme in the manner of a jazz musician, turning the subject this way and that, inspecting it from every angle and finding inconsistencies in human behavior and naked emperors everywhere he looked.

From the mid 1960s on, his work has appeared regularly in major magazines including Sports Illustrated, Esquire, Holiday, Time, The New York Times, The New Yorker and countless others. In 1983, Roth was elected president of the National Cartoonists Society and the next year received the NCS Reuben award as cartoonist of the year. He has won many gold and silver medals in the Society of Illustrators’ annual shows and was inducted into the SI Hall of Fame in 2009. He appeared on the Tonight Show with Johnny Carson several times and on David Letterman’s Late Show. He has lectured at Princeton, Yale, the Philadelphia College of Art, and at other art schools.

—— Adapted from Robert C. Harvey, Author, The Art of the Funnies: An Aesthetic History

About the Museum of American Illustration at the Society of Illustrators

The Society of Illustrators, founded in 1901, is the oldest nonprofit organization solely dedicated to the art and appreciation of illustration in America. Prominent Society members have been Maxfield Parrish, N.C. Wyeth and Norman Rockwell, among others. The Museum of American Illustration was established by the Society in 1981 and is located in the Society’s vintage 1875 carriage house building in mid-town Manhattan. It is open to the public free of charge on Tuesday, 10 am-8 pm; Wednesday-Friday, 10 am-5 pm; and Saturday, 12-4 pm. To learn more about the Museum and the Society, visit www.societyillustrators.org or contact Executive Director Anelle Miller at 212-838-2560 or anelle@societyillustrators.org.

About the Museum of Comic and Cartoon Art

The museum’s purpose has been the collection, preservation, study, education, and display of comic and cartoon art. Every genre of the art is represented: animation, anime, cartoons, comic books, comic strips, gag cartoons, humorous illustration, illustration, political illustration, editorial cartoons, caricature, graphic novels, sports cartoons, and computer-generated art. It is the mission of the museum to promote the understanding and appreciation of comic and cartoon art as well as to detail and discuss the artistic, cultural, and historical impact of what is the world’s most popular art form.