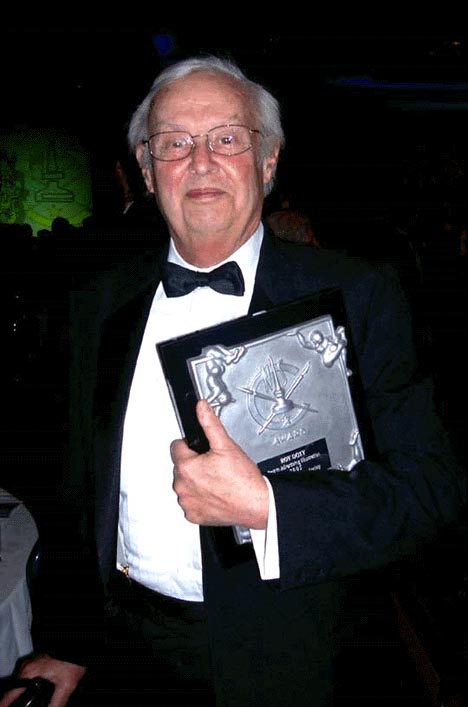 The National Cartoonists Society lost one of their luminaries today when cartoonist and humorous illustrator Roy Doty passed away this morning. Roy had been in declining health since he had a stroke last year.

Roty Doty was a giant in the field of cartooning. He began his career cartooning while serving in World War II, and worked for seventy years as a freelancer. His numerous credits include the feature “Wordless Workshop”, which ran in syndication for 50 years and more recently ran in Family Handyman magazine, and the syndicated feature “Laugh-In” based on the popular TV show “Rowan and Martin’s Laugh-In”, which ran from 1969-72, . His gag cartoons and features have been seen in The New York Times, Field & Stream, Popular Science, the London Daily Mail, Elle and many other magazines. He was one of the the most prominent and sought after cartoon illustrators in advertising, with clients including Buick, Black & Decker, Ford, Macy’s, Minute Maid, Mobil Oil, Texas Instruments and Perrier. He also hosted a children’s TV show called The Roy Doty Show, for DuMont Television Network.

Roy has been honored numerous times by the NCS, including NCS Divisional Awards (Silver Reubens) for Advertising Illustration in 1967,70,78,89,96 and 2005, and for Greeting Cards in 1994. Roy was given the NCS Gold Key Hall of fame award in 2010 in honor of his long and outstanding career.

Here’s a link to a great story on Roy from his alma mater, the Columbus College of Art and Design and Roy’s official web page.