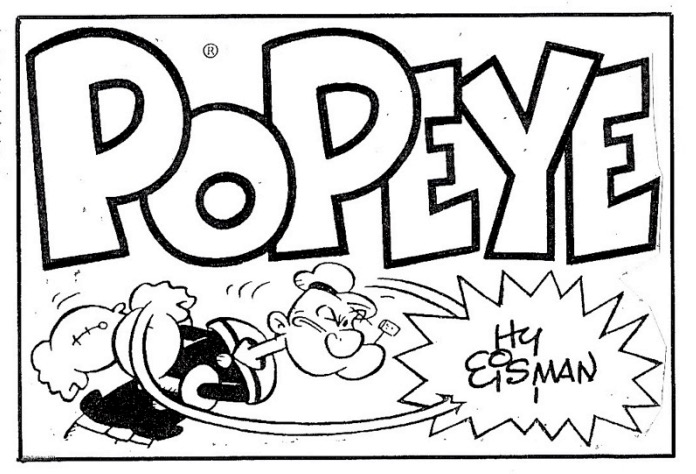 Van Der Plas Gallery is pleased to announce “Popeye”, the first exhibition in history to display the original works of Popeye by the iconoclast Hy Eisman. The show will feature his original comic strip illustrations from the years 2008 to 2012.

Hy Eisman was born March 27, 1927, in Paterson, N.J. He began his career when he created a comic strip for his high school newspaper. After a brief stint in the military, Eisman worked as ghost artist for the popular Kerry Drake comic strip. He soon turned his pen to the comic-book industry, drawing for various publishers of such titles as Nancy, The Munsters, Tom and Jerry and Little Lulu. Eisman’s career as a cartoonist took off in 1967, when he started to draw Little Iodine. He really brought the adventures of the bratty, pony-tailed Iodine to life. He left that strip in 1986 to chronicle the adventures of those two more-famous brats, The Katzenjammer Kids, the world’s oldest continuing comic strip. In 1994, Eisman added another comic legend to his repertoire when he started drawing the Sunday Popeye strip, which stars Popeye, the salty sailor man, and his crew of lovable co-stars Olive Oyl, Swee’ Pea, Wimpy and Bluto who were created by E.C. Segar for his comic strip Thimble Theatre in 1919. Popeye made his first appearance in 1929. He was an instant sensation who would go on to star in hundreds of cartoons, comic books, his own radio show and even a live-action feature film starring Robin Williams. King Features Syndicate distributes Popeye to newspapers worldwide. Eisman received the Comic Book Humor Award from the National Cartoonists Society in 1975 and 1984. (Courtesy of King Features) Vincent Zambrano, filmmaker/multimedia artist along with co-director/artist Marco Cutrone are currently working on a documentary on the life and works of Hy Eisman.