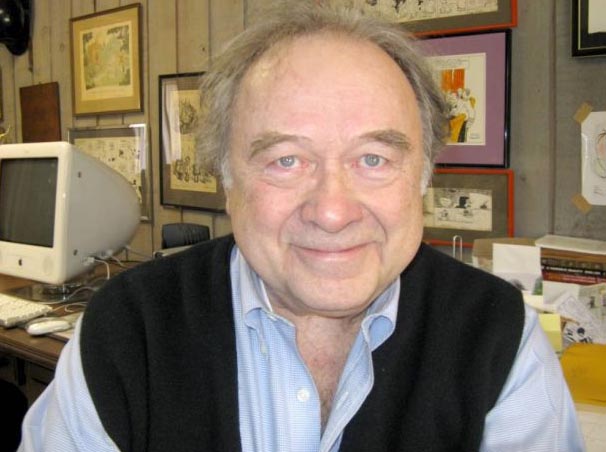 We are deeply saddened to report the passing of our friend and fellow NCS member, Jerry Dumas.

Jerry was born on June 6, 1930 and started drawing when he was nine years old, continuing to cartoon when he was in high school in his native Detroit.

After finishing high school, he joined the Air Force and was stationed in Arizona. He remained in the Grand Canyon State to attend Arizona State University, where he received a Bachelor of Arts in English literature in 1955. Fifty years later, he was invited back to speak at a commencement ceremony.

In 1956, Dumas moved to New York where he eventually met Mort Walker through a mutual friend. They worked together for more than sixty years on both the Beetle Bailey and Hi and Lois strips.

Jerry co-created Sam’s Strip with Mort Walker in 1961. The strip was cancelled in 1963, but was resurrected by Dumas as Sam and Silo in 1977, and it has continued to the present day. In addition, Jerry collaborated on Benchley with Mort Drucker and Rabbits Rafferty and McCall of the Wild with Mel Crawford.

As a writer, Dumas wrote a regular column for his local newspaper “The Greenwich Time,” published a memoir “An Afternoon in Waterloo Park,” and a “Rabbits Rafferty,” children’s novel. His prose and poetry have appeared in “The Atlantic”, “Smithsonian”, “The New York Times” and “The Washington Post”.

Jerry Dumas is survived by his wife, Gail and their three sons, Timothy, David and John.