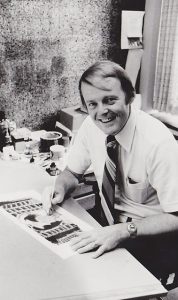 He was born in Dubuque, Iowa, graduating from the Loras Academy there, and then studying at Loras College, the University of Iowa, the Art Center of Los Angeles. He earned a degree from the Chicago Academy of Fine Arts. He was a test pilot for the Air Force for two years; then spent 18 more in the Air Force Reserve.

It was while he was at the Chicago Academy of Fine Arts, in 1957, that he began assisting original Dick Tracy creator Chester Gould. He would do this for three years, and then leave to eventually run “Novamark,” a Chicago-area art studio.

In 1973, the Chicago Tribune hired Dick Locher as its editorial cartoonist. He would remain on staff for forty years, creating more than 10,000 cartoons.

“That’s a whole lot of getting mad six times a week,” Locher quipped to the Tribune when he retired in 2013.

“Cartoonists are pretty boring. So much of their lives are played out in the deepest recesses of their minds, where the light of civil conversation cannot reach. The Tribune’s Dick Locher was not boring. He was an Iowa boy who went on to become a test pilot, commercial artist, Pulitzer Prize-winning editorial cartoonist and the author of decades of Dick Tracy comic strips. But this is simply a list of Dick’s varied accomplishments. What he was was even more extraordinary. In this world of Snapchat vulgarity, Dick was that rare breed: a courtly gentleman.

“When I was lucky enough to be named editorial cartoonist at the Chicago Tribune, one of the very first people to reach out and congratulate me was Dick. I had met him years earlier at an Association of American Editorial Cartoonists convention. As a wet-behind-the-ears cartoonist I was in awe of this giant of our industry but, like a true gentleman, he put me at ease and we became fast friends. Dick has always been a font of encouragement, advice and good humor. An example: During a golf outing in Toronto, I was part of a foursome with Dick. As bad a golfer as I usually am, I was worse that day. Yet after every slice, hook and hack, Dick would be there saying something encouraging. Teeing it up on the 18th hole I can still hear Dick say, ‘Hit a good one, Scott. Lord knows you’re due.'” 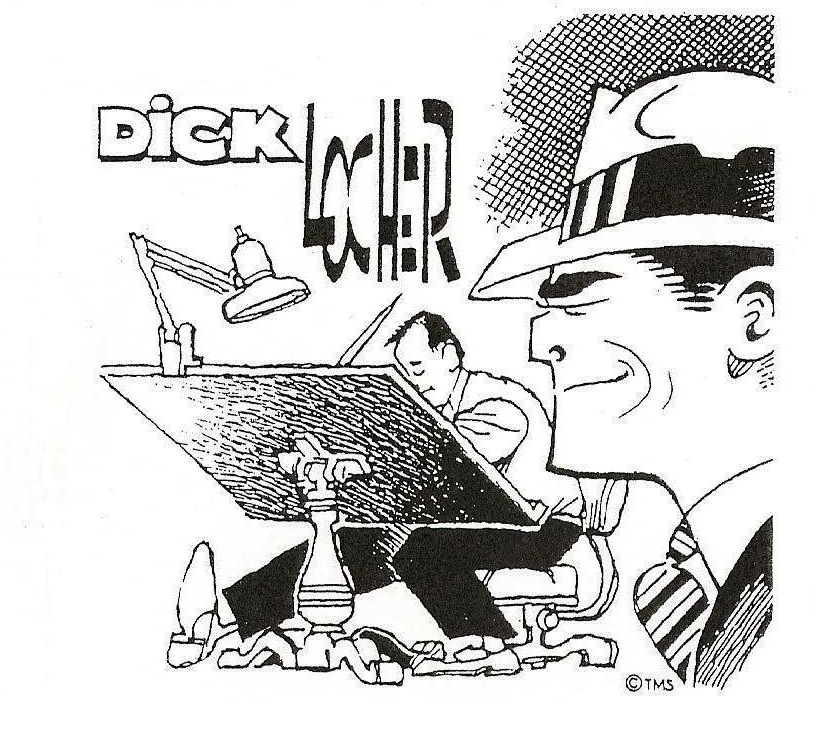 In 1983, two big events occured: He won the Pulitzer (“I’m still numb. I’m still waiting for someone to come in and say they made a mistake.”), and he was asked to take over the Dick Tracy comic strip for Rick Fletcher, who had suddenly passed away. Rick had taken over the strip in 1977, when Gould retired.

For three years, Dick drew Tracy with the assistance of his son, John, who was also a cartoonist. Tragically, John died at the age of 25. Locher created the John Locher Award for college cartoonists in his memory.

He would draw the strip until 2009, continuing the writing chores for another two years. In 2010, he designed a nine-foot tall statue of Dick Tracy for his Naperville, IL town.

From the Daily Herald:

“‘He had so many careers,’ said Mary Locher, who met her husband during a blind date on Christmas Eve. “He always had at least two running concurrently.'” 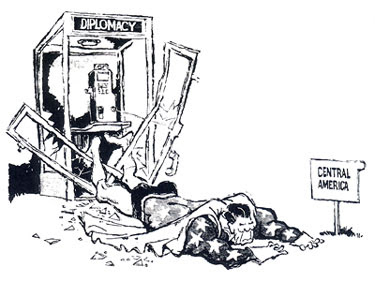 As for me, I met Dick for the first time in a hotel near the Tribune building. It was the 2006 annual National Cartoonists Society Reuben awards. He was a tall guy, and very much a gentleman. I knew him by reputation, of course. Although he did not know me at all, he asked about what I did and listened. It made me nervous. He treated me like an equal.

He told me a crazy story, and if you were ever lucky enough to see him give a presentation, then you may have heard him tell it. I will try to do it justice here. It must have been 1957, and young Dick was visting the legendary Chester Gould in his Chicago Tribune studio. The subject was: drawing Dick Tracy. Gould was a stickler for accuracy. If a criminal was holding a 45mm automatic, it had to look like one. Mr. Gould had many guns there in his office. His “reference.” He had some larger guns as well, shotguns and so on. He took some of them and wrapped them up in a very large piece of newsprint, and handed them to Dick. “Here, go home and study these!”

Dick was nervous, and thought maybe he should just study them there. He didn’t want to walk with streets of Chicago with an armload of weapons! This idea was pooh-poohed by Mr. Gould. Dick was advised to really study them in his own studio. And he was put in the elevator with this large, heavy package of firearms.

Walking the streets of downtown Chicago with a bunch of guns was not what Dick signed up for, but he tried to walk as casually as he could. After walking less than a city block, a squad car pulled up.  Two policemen got out. They appeared to look right at him. And then they began to walk toward him. Dick continued to walk as casually as he knew how. He began thinking about what he would say if they asked to see what he was carrying.

“Hey,” said one of the officers.

“Come on in the squad car with us.” Dick thought about running around this point, but it would do no good. The jig, it appeared, was up. So he got in the back seat with his heavy package.

The officers got in the car, and put it in gear.

Dick didn’t know what they were saying for a minute.

One of them explained that they had been told to “look out” for him. Gould had called the station, and asked that Dick be helped with his heavy package of guns. Yes, they knew that he had a bunch of guns. And it turned out that all of the cops loved Tracy. Anything to help put Dick Tracy’s creator!

They drove young Dick Locher right to his home and let him out.