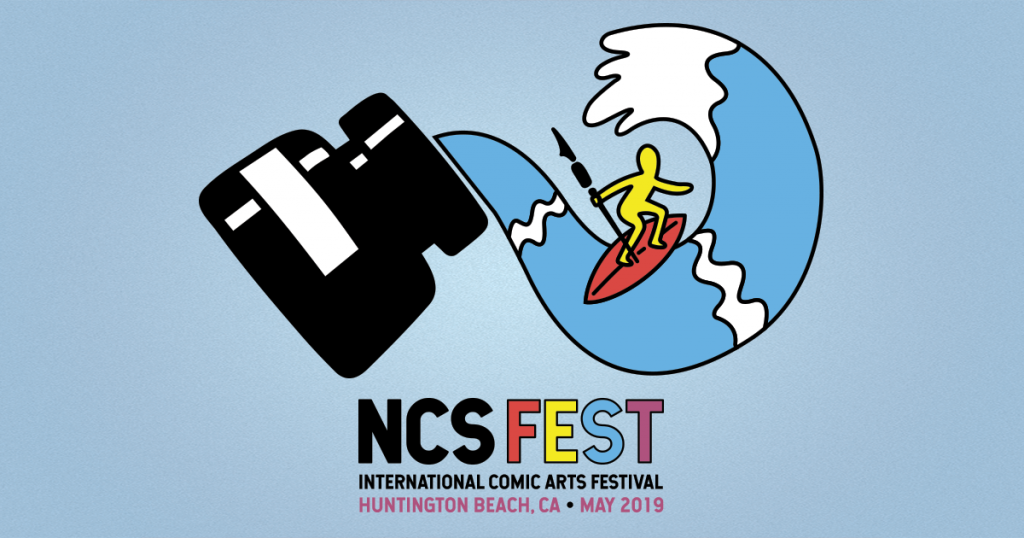 The National Cartoonists Society is delighted to announce that it has chosen the city of Huntington Beach, California, to host the inaugural NCSFest, a celebration of comics and cartoon art from all over the world. Based on the comic art festivals that are hugely popular in Europe, the festival will be held over the weekend of May 17-19, 2019.

Hundreds of the world’s most celebrated creators are expected to attend the three-day event, participating in seminars, exhibitions, workshops, panel discussions and signing sessions, the vast majority of which will be free to the public. Downtown Huntington Beach will be the setting, with all events staged beachside, on the iconic pier, at the city’s Arts Center and library and in local hotels and businesses, all within easy walking distance.

Among the world-renowned creators already confirmed to appear are:

PÉNÉLOPE BAGIEU
The celebrated French cartoonist, a recent transplant to New York, earned rave reviews from the likes of the New York Times, The Guardian and The Washington Post for her modern classic Brazen. 300,000 followers on Twitter attests to her French comics stardom.Follow Pénélope Bagieu on Twitter: twitter.com/penelopeb

DANIEL CLOWES
Cartoonist, graphic novelist, illustrator and screenwriter, winner of multiple Eisner and Harvey awards. He is perhaps best known for Ghost World, the movie adaptation of which earned him an Academy Award nomination.
Daniel Clowes is online at danielclowes.com

SEAN PHILLIPS and ED BRUBAKER
Artist Sean Phillips has worked on the likes of Batman, Hellblazer and “Judge Dredd” for 2000AD; fellow Eisner Award winner Ed Brubaker’s writing credits range from Batman, Daredevil and Captain America to the TV series Westworld. Together, this duo are the creators of the award-winning series Criminal and The Fade Out.
Sean Phillips is online at seanphillips.co.uk
More about Ed Brubaker on the Image Comics official site here

DANA SIMPSON
Creator of the syndicated comic strips Phoebe and Her Unicorn and Ozy and Millie.
Dana Simpson is online at danasimpson.com

BABS TARR
Artist and writer whose credits include Batgirl, Justice League and Motor Crush.
Babs Tarr is online at babsbabsbabs.com

ANN TELNAES
Editorial cartoonist and first woman to win both the Reuben Award and a Pulitzer Prize.
Ann Telnaes is online at anntelnaes.com

SIMON THORP and GRAHAM DURY
A vulgar, bawdy British institution, at the height of its success VIZ comic was selling 1.2 million copies per issue! Simon Thorp and Graham Dury have been the creative culprits at the helm for three decades!
VIZ is online at viz.co.uk

LEWIS TRONDHEIM
Creator of the lauded Lapinot and Dunjon series, the prolific Trondheim is one of the most acclaimed and innovative artists that France has ever produced. He was was invested with a knighthood in the Ordre des Arts et des Lettres in 2005.
Lewis Trondheim is online at lewistrondheim.com

PLUS MANY MORE CREATORS TO BE ANNOUNCED!

Formed in 1947, the National Cartoonists Society is regarded as the most prestigious organisation of professional cartoonists in the world, with such legends as Peanuts creator Charles M Schulz, Walt Disney, Rube Goldberg and Milton Caniff among its alumni. Today’s membership numbers more than 400 eminent cartoonists. The NCS will stage its annual Reuben Awards – the comics and cartoons equivalent of the Oscars – during the Festival.

To create NCSfest, the Society has partnered with the Lakes International Comic Arts Festival, a much-admired annual festival held in the town of Kendal, in the picturesque Lake District of the UK. Julie Tait, Director of LICAF, will act as Assistant Director of NCSFest.

“This is probably the most ambitious comic arts festival ever staged in North America,” said NCSFest Director Steve McGarry, who also serves as President of the National Cartoonists Society Foundation, the charitable and educational arm of the NCS. “We’ve long admired the great comic arts festivals of Europe and we wanted to adopt that model for an American audience. We were hugely impressed with the work that Julie Tait has done, in a very short time, in establishing The Lakes International Comic Arts Festival as the UK’s premier festival, so we are delighted that Julie and her team have agreed to lend their expertise.”

Julie Tait notes that the bonds between The Lakes and NCS are already pretty strong, with many NCS luminaries having appeared at the British festival, including MAD magazine legend Sergio Aragones and For Better Or For Worse creator Lynn Johnston. “Bringing together the best of European-style festivals with the phenomenal force of the NCS is dynamite,” she says. “It’s a world first in this respect and we are honoured and excited to be part of this new collaboration.”

To further cement bonds between United States and European creators, NCSFest is staged in association with France’s Lyon BD Festival, whose director Mathieu Diez is part of the NCSFest advisory team. Diez expressed his delight at being involved in NCSFest, commenting:

“I am extremely excited to be part of this new project aimed at bringing Europe’s fashion of comic art festivals in the United States. I look forward to building a strong French comics presence and wide and innovative programming around the interaction of both cultures of comics.”

“Comic book conventions have become commonplace in every big city in America, but this is something different,” says NCS President Bill Morrison, the editor of MAD magazine. “NCSFest will offer cartoonists and fans a rare opportunity to share in a weekend celebration of comic and cartoon art together in a way that few in this country have experienced.”