Congratulations to the 2020 Cartoonist of the Year nominees!

The nominees are in for the 2020 NCS Cartoonist of the Year!

Here’s a look at the nominees… 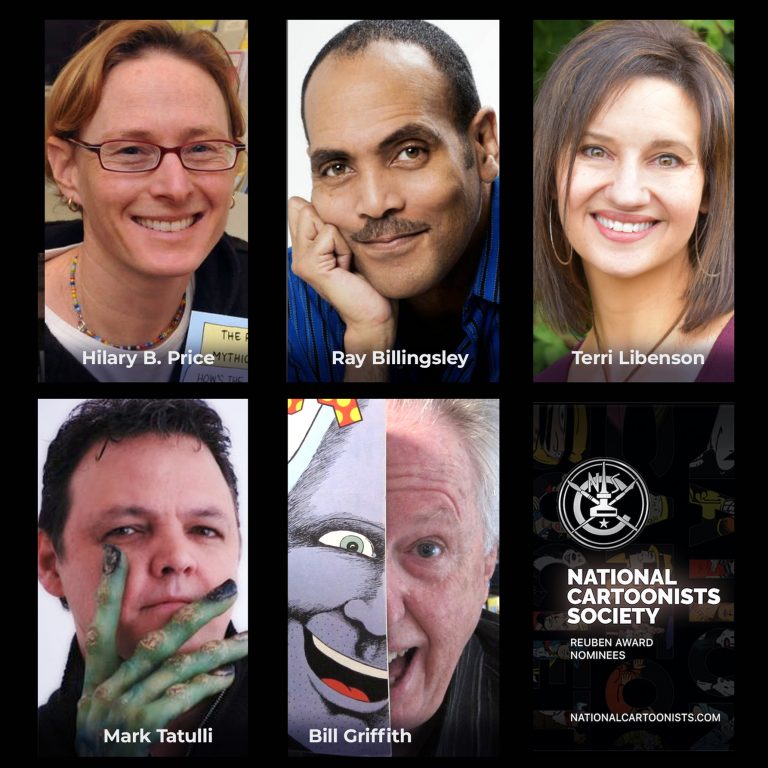 Ray Billingsley’s comic strip, Curtis is syndicated in more than 250 newspapers worldwide. Ray’s excellent craftsmanship coupled with his ability to connect his characters and readers has provided an indispensable element to newspaper comics sections.

Bill Griffith is a pioneer of the underground “comix” movement. His career has spanned decades and he has left an indelible mark across the entire comics idiom — comic books, syndicated comic strips and graphic novels. His character, Zippy the Pinhead is recognized worldwide and is celebrated as equally absurd and profound. With his graphic novels, Invisible Ink, Nobody’s Fool, and his forthcoming graphic biopic of Ernie Bushmiller, Bill Griffith has continued to cement his place in the pantheon of comics greats.

Terri Libenson (pronounced LEE-ben-son) is a New York Times bestselling children’s book author and award-winning cartoonist of the syndicated daily comic strip, The Pajama Diaries, which ran from 2006-2020. The Pajama Diaries launched with King Features in 2006 and ran in hundreds of newspapers internationally until its retirement in January, 2020. Pajama Diaries has been nominated four times for the Reuben Award for “Best Newspaper Comic Strip” by the National Cartoonists Society and won in 2016.

Hilary Price’s comic strip, Rhymes With Orange has been a stand-out for more than 25 years. Drawing from her deep appreciation of classic magazine gag cartoons, comic strips, and picture books, Hilary has created something wholly original and forever made newspaper comic sections richer.

Mark is a comic strip writer/artist, animator and television producer, known for his strips Liō and Heart of the City.  Tatulli is also the author/illustrator of the middle-grade novel series, “Desmond Pucket”. Three books in the series were released: Desmond Pucket Makes Monster Magic (2013), Desmond Pucket and the Mountain Full of Monsters (2014/2015), and Desmond Pucket and the Cloverfield Junior High Carnival of Horrors (2016).

Tatulli released a biographical graphic novel, Short and Skinny in 2018. It chronicles a summer in middle school in which he was inspired by the original Star Wars to make his own parody of the film, while dealing with navigating relationships with bullies, friends, parents and body image.

The winner of the Reuben will be announced on the weekend of October 15th 2021 on NCSFest.com