The National Cartoonists Society is the world’s largest and most prestigious organization of professional cartoonists. It was born in 1946 when groups of cartoonists got together to entertain the troops. They found that they enjoyed each other’s company and decided to get together on a regular basis.

Today, the NCS membership roster includes over 500 of the world’s major cartoonists, working in many branches of the profession, including comic books, editorial cartoons, animation, webcomics and other online platforms, newspaper comic strips and panels, gag cartoons, greeting cards, advertising, magazine and book illustration and more.

Membership is limited to established professional cartoonists, with a few exceptions of outstanding persons in affiliated fields. The NCS is not a guild or union, although we have joined forces from time to time to fight for member’s rights, and we regularly use our talents to help worthwhile causes.

Primary Purposes of the NCS 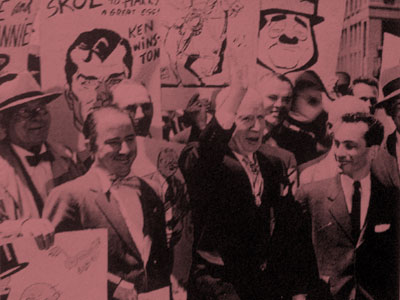 To advance the ideals and standards of professional cartooning in its many forms. 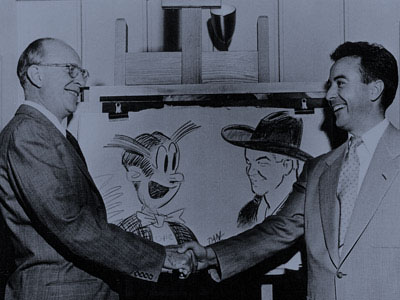 To promote and foster a social, cultural and intellectual interchange among professional cartoonists of all types. 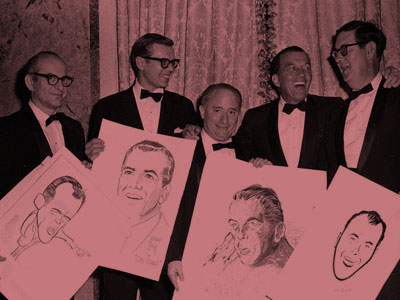 To stimulate and encourage interest in and acceptance of the art of cartooning by aspiring cartoonists, students and the general public.

History of the NCS

Adapted in part from an article by R.C. Harvey in the NCS album.

Detail from a poster of NCS member self-portaits, 1970.

The seeds for what evolved into the National Cartoonists Society were planted during the volunteer chalktalks that a number of cartoonists did during World War II for the America Theatre Wing. The Society was born at a specially convened dinner in New York in March, 1946, that saw Rube Goldberg elected as president, Russell Patterson as vice president, C.D. Russell as secretary and Milton Caniff as treasurer. A second vice president, Otto Soglow, was subsequently added. Within two weeks, the Society had 32 members:

By March, 1947, there were 112 members in the National Cartoonists Society. 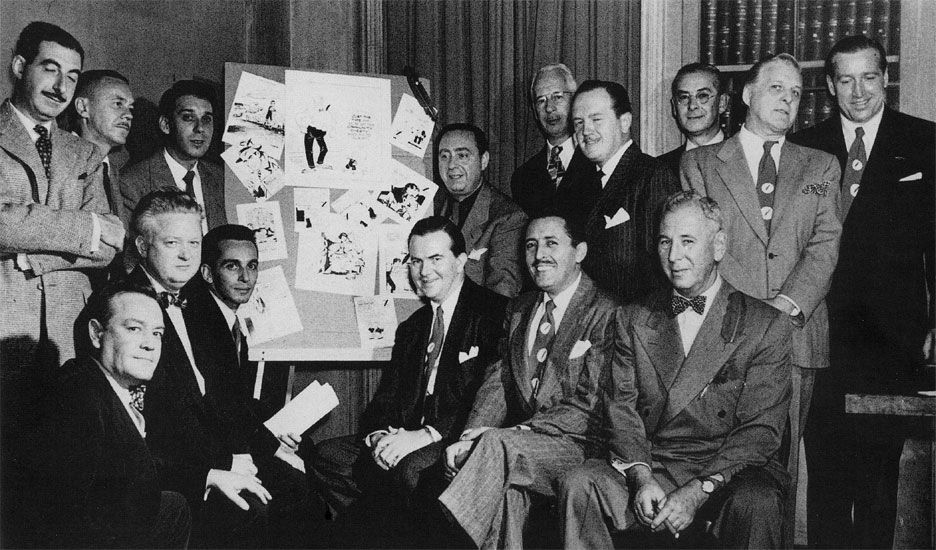 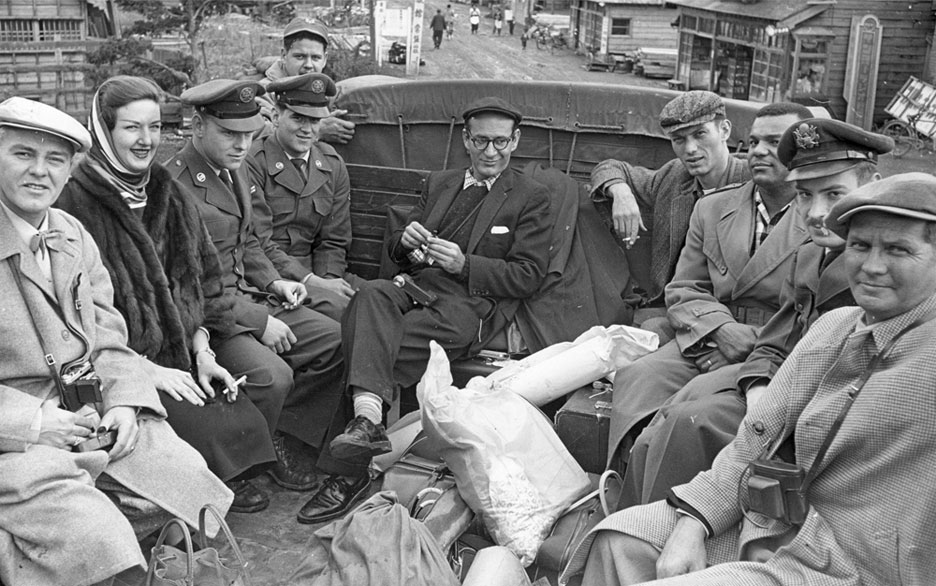 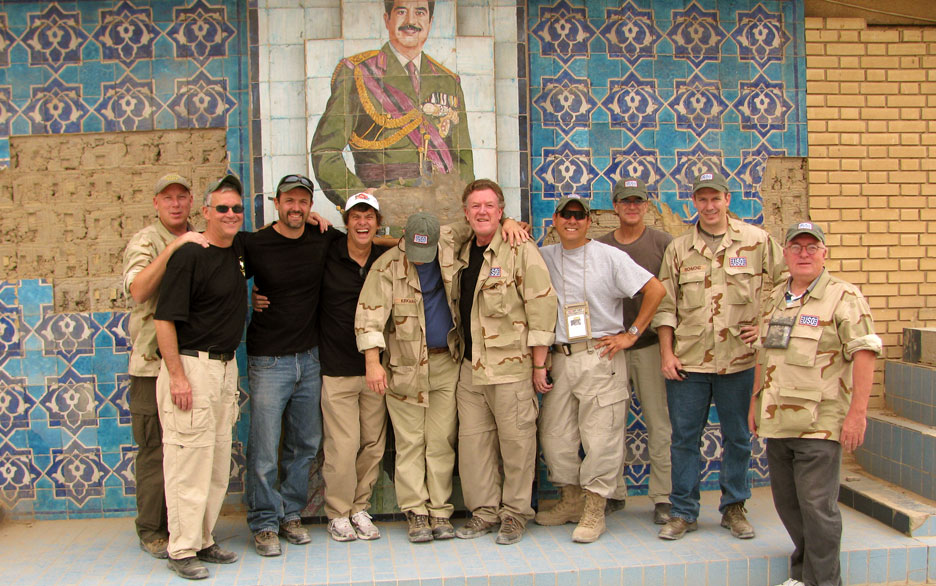 At the end of 1946, Milton Caniff left “Terry and The Pirates” to create the adventure strip “Steve Canyon,” which debuted in 243 newspapers to instant acclaim. The following May, he became the first artist formally honored by the group as the “Cartoonist of the Year.” The trophy was a silver cigarette box, engraved with Billy De Beck’s “Barney Google and Snuffy Smith” characters. The Billy De Beck Memorial Award continued until 1953. The following year, the Reuben Award was introduced.

In 1948, Caniff was elected NCS President. Rube Goldberg was named Honorary President and Al Capp became the second Cartoonist of the Year.

In 1949, the Society volunteered to help the Treasury Department in a drive to sell savings bonds by sending NCS members out on the road. A nationwide, seventeen-city tour was undertaken by teams of ten or twelve cartoonists and a 95-foot-long traveling display.

Through the Society, NCS members have continued to serve the nation in person and through their art. Teams of cartoonists have toured war zones and military installations around the world in cooperation with the USO. Others have entertained at VA hospitals. NCS members have also contributed to many U.S. government programs; their efforts have benefitted NASA, USIA, the Treasury Department Savings Bond division and the President’s Council on Physical Fitness. Other beneficiaries have been the Boy Scouts of America, the American Red Cross and the United Nations.

The tradition of lending our talents to worthy causes continues to this day. In 2001, for example, NCS members in the syndicated community dedicated their newspaper strips and panels to a Thanksgiving initiative that raised over $50,000 for victims of the 9/11 attacks, and members contributed a further $18,000 through the proceeds of a private auction.

NCS Board of Directors 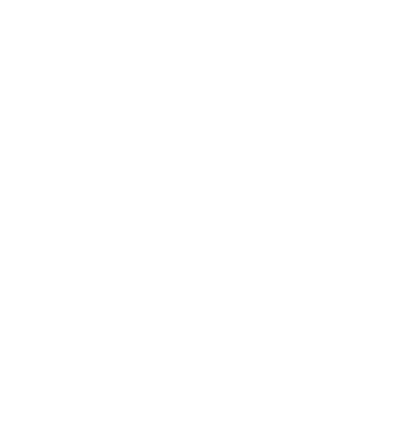 Click on the desired board member's name above to send an email.
NCS members, please refer to your NCS directory for further contact information.
For general inquiries, please contact info@nationalcartoonists.com.

A list of every past NCS president from the Society’s inception in 1946 until today.