On July 26, a powerful voice in the world of animation was silenced when the legendary June Foray passed away just two months shy of her 100th birthday. She brought life and personality to a host of animated characters such as Tweety’s owner Granny, Magica De Spell and Ma Beagle in the original “DuckTales” show, Jokey Smurf in the 1980s TV show, witches by the name of Witch Hazel for both Bugs Bunny and Donald Duck cartoons, little Cindy Lou Who who questioned the Grinch Santa’s motives, Mulan’s Grandma Fa, the creepy Talky Tina from “The Twilight Zone,” and of course Natasha and Rocky the Flying Squirrel from “The Rocky and Bullwinkle Show.” 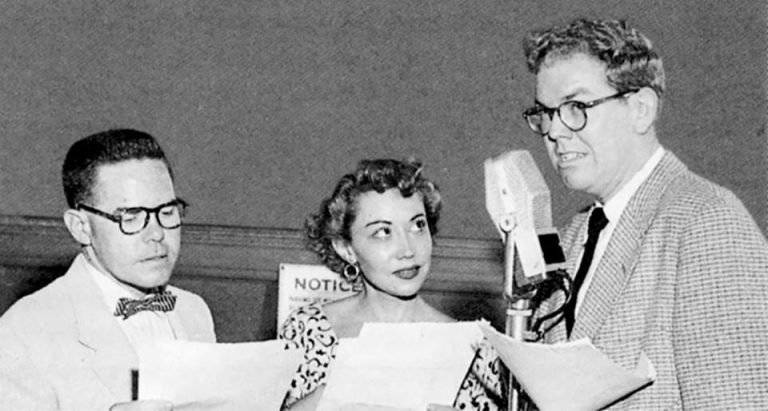 Much has been written about June’s eight decade long voice acting career that began in radio, and grew to include records, toys, TV, shorts, films, theme parks, and just about anything else. We’d like to mention what June meant to cartooning.

June loved spending time with cartoonists. They weren’t just people who hired her to voice their projects, they were her friends. WE were her friends. June often attended art shows to see the personal work of cartoonists. Whenever the Los Angeles chapter of the NCS held an event, June was there bringing her whole family with her. June even hosted big backyard pool parties at her home for cartoonists. Even in her later years, one could see her dini

ng every day at a hamburger place near her home, often with cartoonist friends dropping by for a visit.

June’s friendship with cartoonists wasn’t just limited to friendly repast. She supported us all with a fierce activism for the industry. June served for many years on the Board of Governors of the Academy of Motion Picture Arts & Sciences, keeping a close eye on the Academy’s support of animation by fighting to keep the animated short Oscar as a part of the official ceremony, and helping to create the Animated Feature Film Oscar.

In the late 1950s, June became a very active charter member of ASIFA-Hollywood, an organization that supports the animation industry. In 1972, she spearheaded the founding of ASIFA’s Annie Awards that have become the premiere awards for all aspects of animation. Her volunteer work was rewarded with ASIFA creating the June Foray Award in her honor to recognize individuals whose charitable work for the animation industry might otherwise go unnoticed.

The National Cartoonists Society extends our sympathies to the family of June Foray at this time. She was an extraordinary talent, a tireless supporter of the animation industry, and most of all, a special friend to many of us.