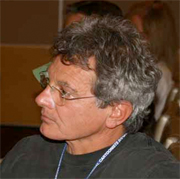 He received the National Cartoonists Society Editorial Cartoon Award for 1993 and nominations for the same award for 1997 and 1998.