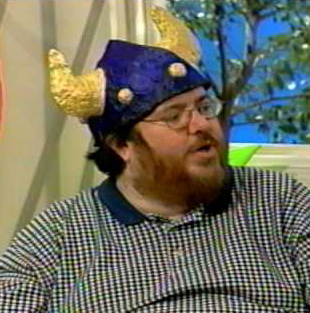 Chris Browne is an American comic strip artist and cartoonist. He is the son of cartoonist Dik Browne and brother of cartoonist Chance Browne. Browne writes and draws the comic strip Hägar the Horrible, which is distributed by King Features Syndicate.

Born in South Orange, New Jersey and growing up in suburban Wilton, Connecticut, Browne assisted his father on the comic strips Hi and Lois and Hägar the Horrible. He contributed to Hägar from the beginning of the comic in 1972 and co-authored Hägar the Horrible’s Very Nearly Complete Viking Handbook in 1985. When Dik Browne died in 1989, Chris Browne continued the strip, both writing and drawing, while Chance Browne took over Hi and Lois. Chris Browne has also created two short-lived autobiographical comic strips: “Chris Browne’s Comic Strip” (1993 – 1994) and “Raising Duncan” (2000 – 2004). Both include a Scottie dog (Scottish Terrier) as a common feature. He currently lives in Sioux Falls, South Dakota.