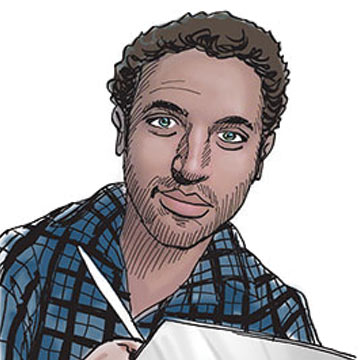 Darrin Bell is a Pulitzer Prize-winning American editorial cartoonist and comic strip creator known for the syndicated comic strips Candorville and Rudy Park. He is a syndicated editorial cartoonist with King Features. Bell is the first African-American to have two comic strips syndicated nationally. He is also a storyboard artist. Bell engages in issues such as civil rights, pop culture, family, science fiction, scriptural wisdom, and nihilist philosophy, while often casting his characters in roles that are traditionally denied them.

Bell was given the 2019 Pulitzer Prize for Editorial Cartooning. In addition to the awards listed below, Bell’s work won several California Intercollegiate Press Association awards and an SPJ Mark of Excellence Award, and he was a two-time runner-up for the Charles M. Schulz Award, as well as a runner-up for the Locher Award.