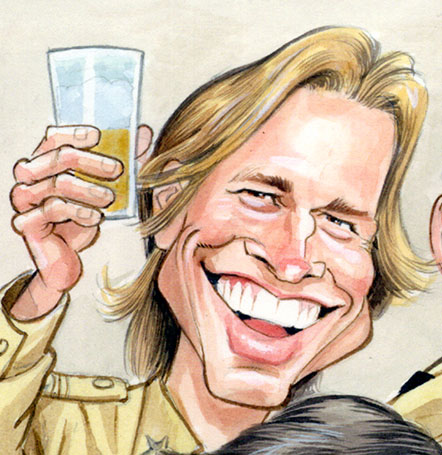 Dave Coverly, a native of Plainwell, Michigan, is the creator of the cartoon panel “Speed Bump”, which runs internationally in about 400 newspapers and websites, including the Washington Post, The Globe & Mail (Toronto), the Los Angeles Times, and the Detroit Free Press. His work was named “Best in Newspaper Panels” by the National Cartoonists Society, in 1995, 2003, and 2014.

In 2009 the same organization gave him its highest honor, the prestigious Reuben Award, for “Outstanding Cartoonist of the Year”.

Coverly’s cartoons have also appeared in The New Yorker, USA Today, The New York Times, Newsweek, Esquire, and have been a regular feature in Parade. He is also the cartoonist for BarkBox, and has done multiple labels for Bell’s Beer.

Coverly earned his BS with a double major in Imaginative Writing and Philosophy at Eastern Michigan University in 1987 and received his MA in Creative Writing from Indiana University in 1993. In 2011, he was asked to give the commencement address at EMU, where he was awarded an Honorary Doctorate in Fine Arts.

He has two daughters, Alayna and Simone, and lives with his wife, Chris in Ann Arbor, Michigan.