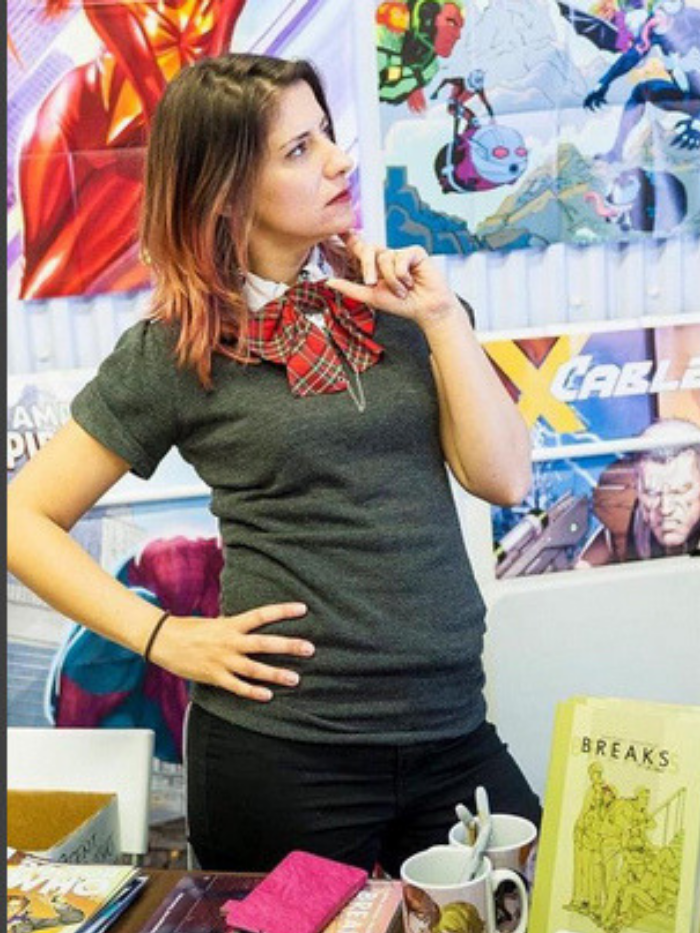 Emma Vieceli is a professional British comics artist and writer whose credits include Manga Shakespeare for SelfMadeHero, Young Avengers for Marvel Comics, Back to the Future for IDW, Comic Book Tattoo for Image Comics, Doctor Who for Titan comics, and her creator-owned title BREAKS co-written with Malin Ryden.

Vieceli joined Sweatdrop Studios as a small-press hobbyist in 2002 and, through the group, released her own comic series ‘Dragon Heir’ as well as contributing to several anthologies. She was a core member of the team when the group transitioned to publisher status. A fan of the diversity and potential of comic storytelling, she used her time with the group to encourage new creators, and to help in establishing competitions and events to serve as a platform for nurturing new talent and breaking down barriers between creators. In 2005, Vieceli and Sweatdrop Studios colleague Sonia Leong were approached by the organisers of the MCM London Comic Con to bring something new to the at the time small event. The result was the Comic Village, which showcases a combination of independent and small press comic book creators and big names from mainstream comics. The Comic Village has since become a regular part of what has become the UK’s largest convention of its kind. In 2007 she started freelancing as a comic artist, having been contracted for Self Made Hero’s adaptation of William Shakespeare’s Hamlet. Several years later she stepped down from Sweatdrop to focus on her career. Other work include another William Shakespeare adaptation for Self Made Hero – Much Ado About Nothing, as well as providing art and design for various other projects, including the collectible card game Herocard Cyberspace from Tablestar Games and working as one of the head contributors to Draw Manga Sweatdrop Studios from New Holland Publishers (UK) Ltd. She illustrated the cover to eV, a short story in Princess Ai: Rumors From The Other Side, both published by Tokyopop, and a story in Tori Amos’ Comic Book Tattoo – a 480-page anthology published by Image Comics on 3 July 2008. In addition, she created Violet for The DFC, which was previewed in The Guardian Comic on 31 May 2008. In 2011, Vieceli provided the art for the Vampire Academy graphic novel, based on the novels of the same name. In 2014, Emma and Malin Ryden co-created the webcomic BREAKS – an LGBT story which publishes a new page online every week, and the first volume of which was released in print by Soaring Penguin Press in 2017. She has also started to get more attention in mainstream comics, providing art for titles such as The Wicked + The Divine (Image Comics), Sensation Comics featuring Wonder Woman, The Adventures of Supergirl (DC Comics), Dead Boy Detectives (Vertigo Comics), Young Avengers (Marvel Comics) and the Love Is Love (comics) anthology (IDW Publishing) released to raise proceeds for the families of victims of the Orlando nightclub shooting, as well being the regular artist for Olivia Twist (Dark Horse Comics). She has also worked on various tie-in titles such as Doctor Who, Jem and the Holograms, Back to the Future and provided covers for comic adaptions of Ben Aaronovitch’s Peter Grant (book series) novels. In 2018, Vieceli was announced as the writer for Titan Comics’ new comic book based on the award winning video game Life Is Strange set after the “Sacrifice Arcadia Bay” ending of the game and featuring art by Claudia Leonardi. Outside of comics, Vieceli has appeared on television as a co-presenter of the two-hour daily Anime Network segment on the Propeller TV satellite channel, and regularly appears onstage with the Cambridge Theatre Company. As of 2019 her most recent role was in a musical adaptation of Louisa May Alcott’s Little Women. She has also worked on the A&E (TV channel) television series Bates Motel (TV series), providing the sketchbook found within the show by Norman Bates, and provided art for tinyrebel’s Doctor Who Infinity games.