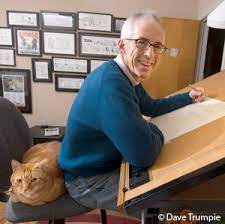 Jef Mallett (born 1962) is the creator and artist of the nationally syndicated comic strip Frazz. He attended nursing school as well as EMT training before leaving to pursue his artistic interests.He has a longtime interest in bicycling and hanggliding and is an avid triathlete, having completed his first triathlon in 1981 (coming in 9th). He has twice completed the Ironman Triathlon. He is married to Patty and lives in Huntington Woods, Michigan. While in high school, Mallett published his first comic strip for his local newspaper, the Big Rapids Pioneer. His first comic series was entitled “Birchbark”, featuring a French-Canadian trapper. After becoming a graphic artist, he worked in that capacity for regional newspapers, the Grand Rapids Press and the Flint Journal. Afterwards, Mallett left the commercial world to concentrate on Frazz full-time.