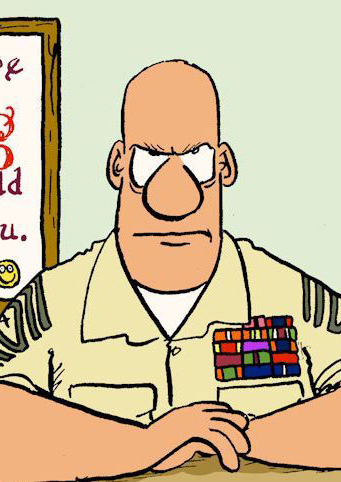 Jeff Bacon’s first Navy Times cartoon was published in March 1986. By the end of that year, the panel was titled “Broadside” and has appeared weekly ever since. In 2006, his Marine-oriented cartoon “Greensid” began its run in Marine Corps Times. His art has been printed in numerous government publications, professional papers, and a lot of cubicles around the world. His cartoons have been displayed at the Navy Art Gallery and the Navy Memorial in Washington, D.C., and have been published in three books: The Best of Broadside, Book II: the Rest of Broadside, and 20 Years of Broadside. He donates artwork to the Navy Memorial and Naval Institute throughout the year, and has been a featured speaker for numerous commands and organizations around the world. A Navy veteran, he has been active in the “Support the Troops” initiative, arranging visits by professional cartoonists to active duty and VA hospitals, in order to give back to those who served.