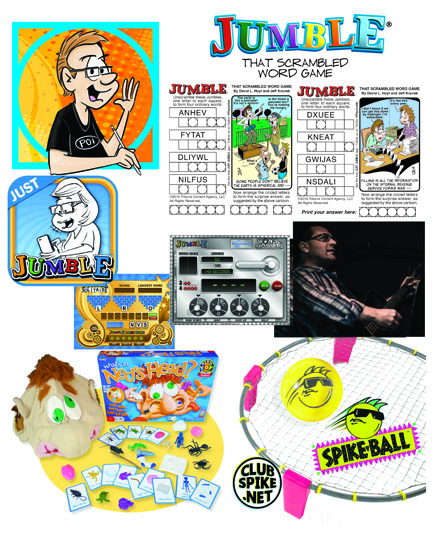 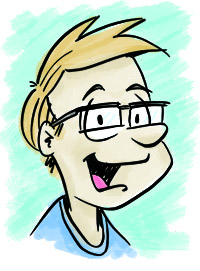 Jeff Knurek, Jumble cartoonist, is an award winning toy and game inventor, consumer product developer, graphic artist, illustrator, cartoonist, and puzzle creator. Knurek’s first game invention to make it to market, in 1989, was the outdoor game, Spikeball. This game has now become one of the fastest growing sports in the world.

His other game credits include Family Fun magazine’s “Toy of the Year” award winners: “What’s In Ned’s Head?” and “MonsterUnder My Bed.” Knurek also develops and licenses children’s magic tricks and products for Las Vegas headliner, Mac King.
In 2008, Jeff Knurek became only the third artist to draw the popular Jumble puzzle cartoon, seen in more than 600 newspapers. He took over the art duties for Jumble, when the great Henri Arnold retired. Knurek’s unique humor and style can be seen
in the caricatures and fun pop culture references placed throughout his cartoons. Knurek’s hometown is Southgate, Michigan. He has lived throughout the Midwest, in Ohio, Illinois and Indiana. Knurek received a B.F.A. in Industrial Design, with an Art Education certification, from the University of Michigan. In 2007, he donated a kidney to a family member with Polycystic Kidney Disease, and both are doing great. Knurek currently resides in Fishers, Indiana, with his wife Kathy; and children, Sydney and Cameron.