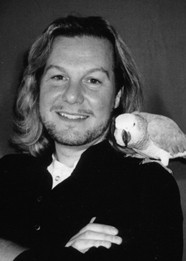 John Manders was educated at the Art Institute of Pittsburgh and later took courses at the School of Visual Arts and the Fashion Institute of Technology in New York, where he studied children’s illustration, animation, and life drawing. His interests include puppetry (he studied that at Syracuse University College) and trying to speak Italian. John’s work is featured in over 30 children’s books and gazillions of children’s magazines. He’s a member of the Society of Illustrators, the Society of Children’s Book Writers & Illustrators, and is a founding member of the Pittsburgh Society of Illustrators. John was also their first president. A pet lover, John organized the successful Bow Wow Meow art auction that benefited the Animal Rescue League of Western PA, and the PSI scholarship fund. He also curated Illustration: The Process, an educational exhibit of fourteen illustrators and their working methods. John’s incredible work has been exhibited at the Art Institute of Pittsburgh gallery, the Pittsburgh Children’s Museum, and he was honored in the 25-year retrospective of Cricket magazine covers, held at the Art Institute of Chicago in 1999. That year, he was also a participant at the Children’s Book Fair in Bologna, Italy. In May, 2006 he was named Outstanding Illustrator/Author by the Pennsylvania School Librarian’s Association. John’s technique involves lots of research before beginning preliminary drawings. Using 2B pencils on layout bond paper, he transfers the drawings onto Arches 300 lb hot press watercolor paper. Next is an ‘underpainting’ in neutral tones with Winsor & Newton Designers gouache. The color is painted on top of that. Prismacolor pencils are used for highlights and accents.