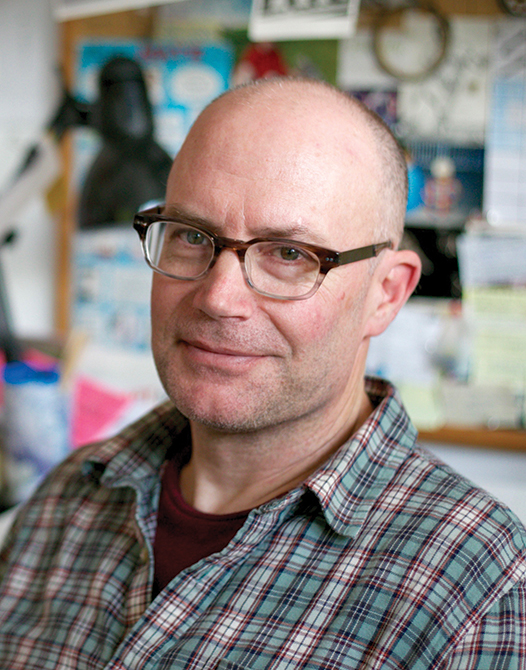 Lincoln Peirce is best known as the creator of the successful Big Nate comic strip and as the author/illustrator of a series of Big Nate novels for young readers. He has also written a number of animated shorts that have appeared on Cartoon Network and Nickelodeon. Peirce is the creator of the upcoming animated series Big Nate, which will air on the aforementioned channel.

Peirce is the creator of the comic strip Big Nate. The strip debuted in 1991 in 135 newspapers, and currently has a client list of over 400 newspapers worldwide. Big Nate is also available online at gocomics.com, where in 2019 it was the site’s second most-viewed feature, ranking behind only Calvin & Hobbes. The popular children’s website poptropica.com has included Big Nate since 2009. In 2010, Peirce wrote the first of eight Big Nate novels for young readers. Published by HarperCollins, each book in the series was a New York Times bestseller. In 2011, Andrews McMeel Publishing began a series of Big Nate compilations. The series consists of 22 books to date and every one of them has been on the New York Times bestseller list. Under the AMP! Comics for Kids imprint, twenty collections have been released. Epic Big Nate, a coffee table book celebrating the strip’s first 25 years, was published in 2016. Big Nate books appear in 33 different languages and have sold over 20 million copies. Peirce has also written for television, contributing to Cartoon Network’s shorts program and Nickelodeon’s Random Cartoons. He created two Uncle Gus stories (“For The Love of Monkeys” and “Not So Fast”) for Cartoon Network, and later wrote a series of 2-minute shorts called The Brothers Pistov for the short-lived series Sunday Pants. At Nickelodeon, Peirce wrote and storyboarded “Super John Doe Junior,” about the son of a beloved crimefighter who has inherited none of his father’s super powers. On February 19, 2020, Nickelodeon announced plans for a 26-episode Big Nate animated series.