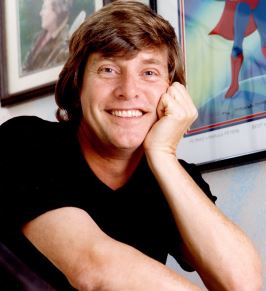 Michael Bartley Peters, better known as Mike Peters, is an American Pulitzer Prize-winning editorial cartoonist and the creator of the comic strip Mother Goose and Grimm.

On his return from his army service, his mentor Bill Mauldin helped him get a job as editorial cartoonist for the Dayton Daily News in Dayton, Ohio. As a joke, he once stood on the building ledge outside the Daily News building for 30 minutes wearing a Superman costume so that he could make an entrance to a meeting through the window in the manner of actor George Reeves entering Perry White’s office on The Adventures of Superman. When his animated editorial cartoons Peters Postscripts began on NBC Nightly News in 1981, it was the first time animated editorial cartoons appeared regularly on a prime-time network news program. Peters also hosted the 14-part interview series The World of Cartooning with Mike Peters for PBS. In regard to politics, Peters’s editorial stances are generally left of center.

In 1984, he launched Mother Goose and Grimm, distributed by King Features Syndicate. The strip is published in 500 newspapers, and according to King Features, it has a daily readership of 100 million. Peters’ editorial cartoons and his comic strip are both distributed through King Features’ DailyINK email service.