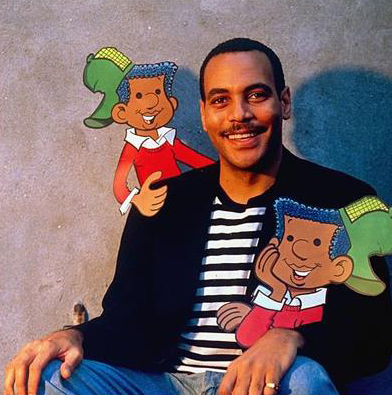 Ray Billingsley, the creator of Curtis, one of today’s most important and poignant features on the comics pages. Billingsley draws from real life, and the strip has the fresh quality of situational humor, mixed with melodrama, comedy and pathos. Distributed by King Features Syndicate, Curtis is read in more than 250 newspapers nationwide. The strip depicts the urban existence of Greg and Diane Wilkins, a black family that lives in a weathered brownstone. Eleven-year-old Curtis and his younger brother, Barry, are emblematic of preteens in the big city, navigating their way through adolescence and its delights and dangers. Other characters in the strip include Gunk, Curtis’ best friend from Flyspeck Island, sweet Chutney (who adores Curtis), and the egotistical Michelle (whom Curtis adores, but she doesn’t return the same sentiment). School bullies Derrick and Onion gives Curtis a bad time, and strict teacher Mrs. Nelson doesn’t make life at school any easier. In the local barbershop, Curtis has a friend in Gunther the barber, although Gunther never seems to remember his name. Billingsley acknowledges that “Wee Pals” creator Morrie Turner, the first African-American to bring an interracial cast to national syndication, did indeed open the doors for CURTIS and other strips of the genre. He also credits Will Eisner, creator of the masterpiece “The Spirit”, and also Billingsley’s instructor for encouraging him to stretch out artistically. “He always told me to reach out and do more than I thought I could. He was, and still is, a true creative inspiration.” said Billingsley. Cherished friendships with Mort Walker (Beetle Bailey), Charles Schulz (Peanuts), Jules Feiffer, Arnold Roth, Bunny Hoest, and many other giants in the industry further fanned his flame to create a lasting feature. Although his family roots are from Wake Forest, N.C., Billingsley was raised in New York City’s Harlem. It was a time when the citizens were plagued by poor surroundings and drug use, yet teeming with individual creativity. Ray comes from a tight-knit family. It was his older brother, Richard, who sparked his initial fascination in the arts and cartooning. As a very young child, he learned to draw in order to emulate his brother. At the age of twelve, Ray was discovered by “KIDS Magazine”, and hired as a staff artist. Life for him then changed and he never looked back. Although it led to long periods of isolation and the desire to be like others he grew up around, he doesn’t regret a minute of it. Billingsley credits his early introduction to professional status as the saving grace from the evils of the urban streets. After graduating from The High School of Music and Art in Manhattan, he attended The School of Visual Arts there on a full four-year scholarship. The day after graduating, he began an internship at The Walt Disney Studios in 1979. However, he was taken away when he landed his first nationally syndicated strip “Lookin’ Fine” from 1980-’82, under United Features Syndicate. Billingsley further honed his style, studied, and freelanced full time. Advertising, animation for independent films, graphic designs, greeting cards, clothing designs, and magazine spots were all part of paying his dues. In October of 1988, King Features Syndicate introduced CURTIS. CURTIS is a full-time job and Billingsley is a perfectionist, working from his studio in his Connecticut home. He balances his life with his family, the few whom he considers real friends, and his faithful companion Higgins, the Basset Hound. Billingsley is low-key and somewhat reclusive, enjoys music and the simple things in life. He still studies, reads classic strips, and likes to travel and explore life (although he hates the hassle of travel, and has a little fear of flying), and is actually a very good chef. Educators and community leaders have praised Billingsley for his thought-provoking and honest handling of such serious social and health issues as smoking, drug abuse, crime and asthma. In recognition of his storylines in which Curtis tries to get his father to quit smoking, Billingsley has received numerous awards and recognition from the American Lung Association, including the President’s Award in 2000 during the American Lung Association/Canadian Lung Association conference in Toronto, Canada. The President’s Award, which was first given in 1983, was created to acknowledge an individual, or nonprofit or commercial organization, responsible for an outstanding contribution in an area of importance to the goals of the American Lung Association. In addition, Billingsley received the Humanitarian Award from the American Lung Association of Southeast Florida in 1999.