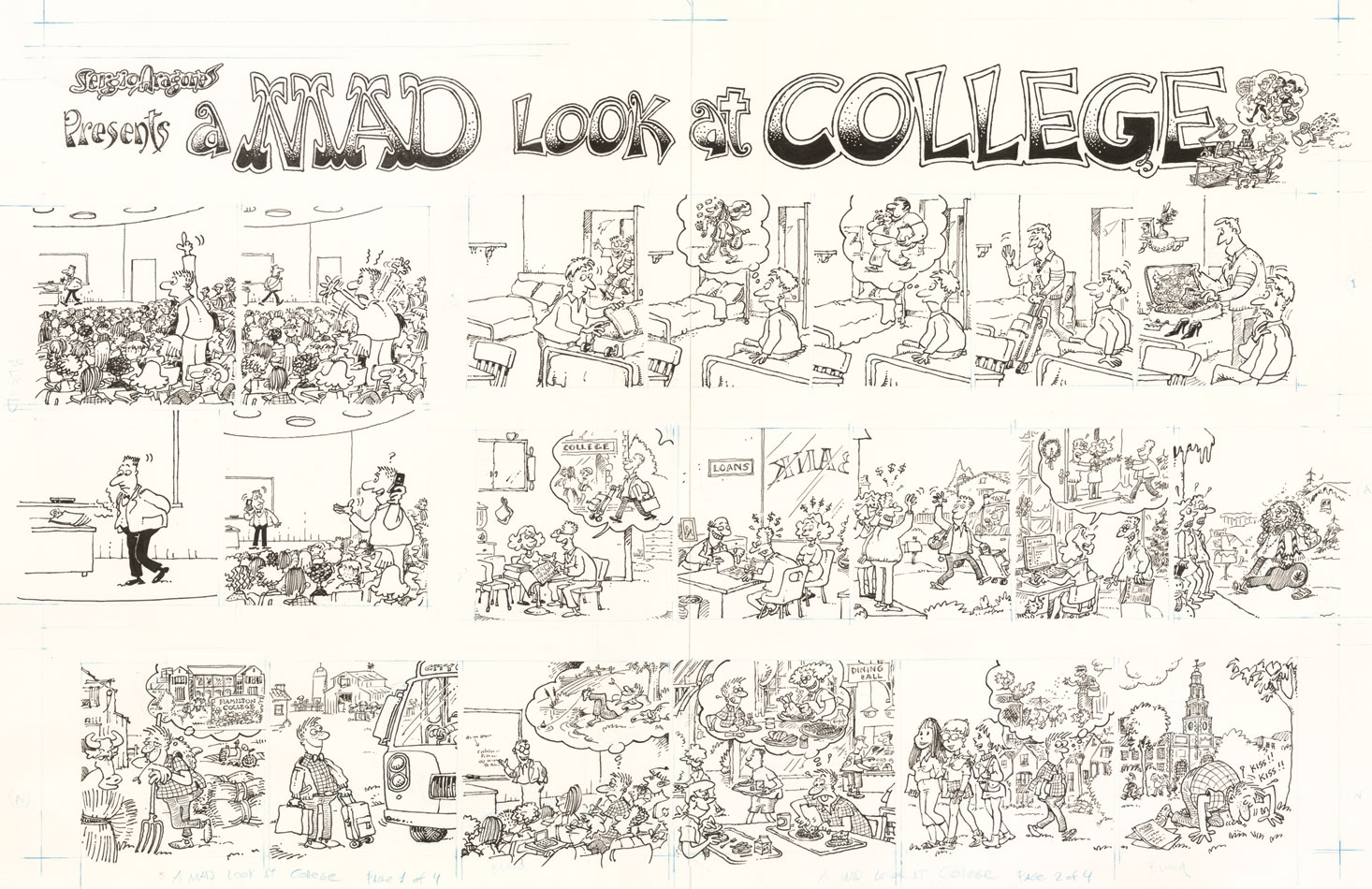 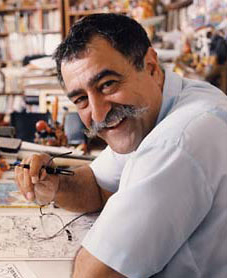 Sergio Aragonés is said to be the fastest cartoonist in the world today. He is certainly the most honored, having won every major award in the field, including the National Cartoonists Society’s Reuben Award, and the Will Eisner Hall of Fame Award. He was born in 1937 in Castellon, Spain but his family soon relocated to Mexico during the Spanish Civil War. In Mexico, Sergio received his education, eventually studying Architecture at the University of Mexico, and also learning pantomime under the direction of Alexandro Jodorowsky. But his heart was always in cartooning, a craft he discovered in the third grade, to the delight of his classmates and the annoyance of his instructors. He contributed to school newspapers and anywhere else he could get his sketches printed and, at age 17, began selling professionally to a wide array of Mexican publications. He maintained a weekly spot for over ten years in Mañana Magazine. In 1962, he decided to try his luck in America, and arrived in New York with only twenty dollars and a folder bulging with his cartoon work. At first, work was slow in coming and what he did sell didn’t pay very well, forcing him to work as a singer/poet in Greenwich Village restaurants and to pick up other odd jobs. Things changed when he mustered the courage to approach the top market for silly pictures, Mad Magazine. Embarrassed by his halting English, he went to their office and asked for Antonio Prohias, the Cuban refugee who drew their popular “Spy Vs. Spy” feature. Sergio figured that Prohias could translate for him, but he figured wrong: Prohias, though thrilled to meet a fellow Hispanic cartoonist, spoke even less English than Sergio. He did, however, introduce his new “brother” about, and the Mad editors liked what they saw. Sergio’s first contribution — “A Mad Look at the U.S. Space Effort” — appeared in Mad #76, cover-dated January of 1963. For that same issue, he also contributed the cover gag (the first of many) and his first “Marginal Thinking” cartoons to be printed in the magazine’s margins. He has since appeared in every issue of Mad except for one (the post office screwed up) and has done thousands of his unique pantomime cartoons. He also produced 16 best-selling original Mad paperback books. In the early eighties, Sergio teamed with wordsmith Mark Evanier to bring forth the adventures of Groo the Wanderer. Groo quickly became one of the longest-running “creator-owned” comic book properties, outlasting many of the companies that published it. Together, Sergio and Mark have also produced other comics, including Fanboy, Boogeyman, Magnor, Blair Witch? and an acclaimed series in which together, they trash famous characters: Sergio Aragonés Massacres Marvel, Sergio Aragonés Destroys DC, and Sergio Aragonés Stomps Star Wars. For their comic book work, they have received multiple Eisner awards. Sergio has also “soloed” with two all-pantomime series, Actions Speak and Louder Than Words and on his new comic from Bongo, Sergio Aragonés Funnies. Sergio has appeared as an actor-performer on television (on, among others, Laugh-In and Speak Up, America) and motion pictures (in, among others, Norman, Is That You? and To Kill A Stranger). His artwork has appeared on hundreds of advertisements and editorial features, and his animation has been featured on numerous TV shows, including The Shirley MacLaine Special, The Cher Special, The Half-Hour Comedy Hour and Dick Clark’s TV Bloopers and Practical Jokes. He lives and works in Ojai, California.