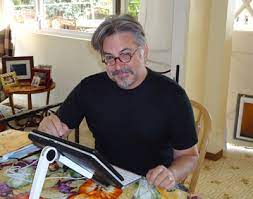 Thomas Leslie Lewis III, mostly known as T. Lewis, is an American artist who has worked as a book illustrator. He received the National Cartoonist Society Book Illustration Award for 1999. He illustrates the comic strip Over the Hedge. Lewis worked for Disney on the Mickey Mouse comic books in the early 1990s, where he met Mike Fry, his future collaborator on Over the Hedge. In addition to his comic illustrations, T Lewis illustrated three series of educational storybooks which are part of science teaching units for grades K-2, 3-5 and 6-8, published by the Center for Educational Outreach at Baylor College of Medicine. Lewis lives in Omak, Washington.