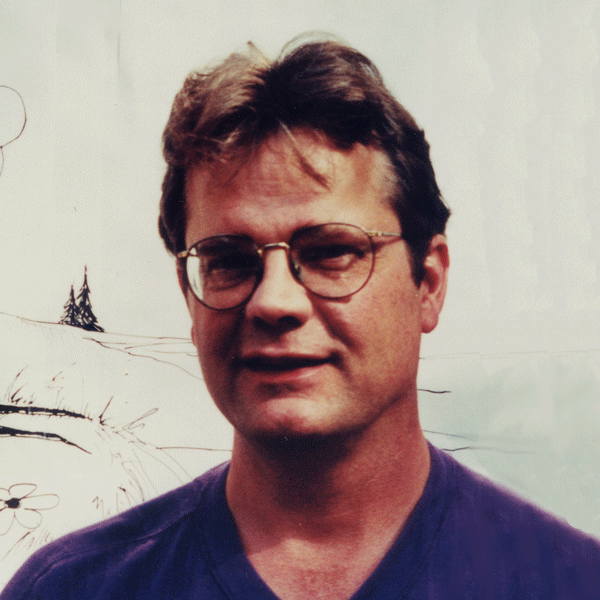 Tony Cochran’s painting career was financially enhanced by his work as an auto-body repairman for 15 years. He’s been drawing for as long as he can remember, even on the undersides of car fenders when artistic inspiration could not wait for the evening studio. Then Agnes spoke to him from his sketchbook. Delving into the life of someone yearning to stand out and be noticed, Cochran mirrors the ramifications of growing up in today’s society. Agnes lives in a state of delicious angst, a child of meager means trying to define her place in the world. Cochran offers a funny, poignant glimpse of Agnes, and anyone like her, who dreams of a world much bigger than their own. Agnes launched in the newspapers on March 8, 1999, and is now syndicated worldwide. Tony and his wife, Vickie, live in Columbus, Ohio. Agnes lives with her grandma in a house trailer in their community called “The People’s Court.” She is a young girl with long, elegant feet and an imagination just a bit too big for her head. The spillover is handled by her best friend, Trout, a realist who helps manage their journey up the river to adulthood … but river journeys are slow when you’re both stuck in boot-sucking mud! The river of life sometimes leaves a lot of messy puddles. It’s a scramble through youth’s treacherous minefield. Agnes has big dreams. Sometimes she wakes up in the middle, sometimes she sleeps right through them. Everybody has dreams, and that’s why people identify with her. Cochran and Agnes have traveled many roads since her creation. Cochran’s first book, “Agnes: I’m Far To Young to Look This Hot,” was published in February 2004. Agnes and Trout continued their meandering dance in the second Agnes collection, “I Have Tampered With the Divine Plan,” published in April 2005. Cochran was the celebrity guest on NPR’s “Wait Wait Don’t Tell Me,” when it was taped live at the Ohio Theater and a guest speaker at the Erma Bombeck Conference on American Humor. He was presented with the To Boldly Go Excellence in Media award from New Mexico’s Parents for Behaviorally Different Children agency in 2005. He regularly is invited to speak at book signings, chambers of commerce, schools, churches, philanthropic groups, libraries, social organizations, etc. He is also known to be a soft touch to public service groups seeking his support for their work with physically and mentally challenged people, literacy development, pet rescue, and others. Pretty big gigs for a man who practices a solitary profession!