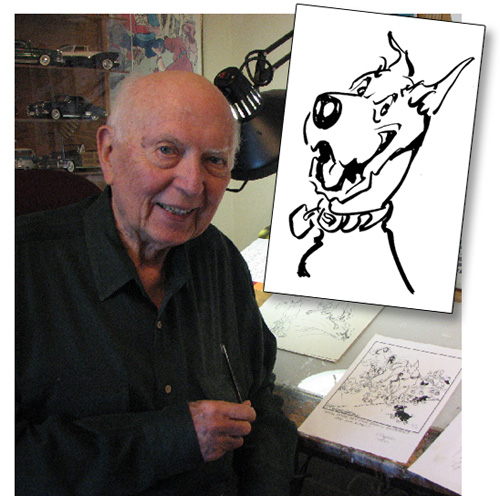 Brad Anderson, the creator of the comic strip Marmaduke, will be honored with the National Cartoonists Society’s Milton Caniff Lifetime Achievement Award at the 2013 NCS Reuben Award Weekend, held this year in Pittsburgh, PA on May 24th-26th. Brad’s amazing career spans 60 years and includes cartoons for many magazines and publications in addition to Marmaduke, which is syndicated by Universal Uclick. In 2010 Marmaduke became a major motion picture from 20th Century Fox, featuring a computer animated Marmaduke alongside live actors.

About Brad Anderson (an excerpt from an America Profile article from 2010):

“Marmaduke is very expressive and very active, and he’s always doing something funny or ridiculous or crazy,” says Anderson, adding accent lines that suggest a dog in motion. “He’s always jumping over the couch, chasing after a cat. In the car, he wants to take over and drive.”

Working in his home in Montgomery, Texas (pop. 489), Anderson chronicles the amusing antics of the awkward but loveable Great Dane, creating six single-panel comics and one Sunday strip each week to add to his collection of 20,000 Marmaduke-inspired comics, two dozen books, a 1970s animated TV show and a new feature film.

Universal Uclick distributes Marmaduke to more than 500 newspapers in 10 countries. Every day, people can read Marmaduke and expect to get a little chuckle.

These days, nobody chuckles more than Anderson, who never dreamed he’d still be drawing the canine character that he introduced to the comics pages in 1954. “Every day, I go to work still enjoying the challenge of creating expression and body language,” he says. “It’s never a burden, never a job. It’s just fun.”

Born in 1924 and raised in Portland, N.Y., Anderson nurtured his artistic talent whenever he wasn’t helping his mother garden or his dad in the family’s farm machine business. “My mother said I started drawing before I could talk,” recalls Anderson, whose first words included a repeated request for a “pentil” and whose first vivid memory was using a pencil to draw on the sidewalk at his grandparents’ house.

During high school, he sold his first cartoon to Flying Aces, an aviation magazine. The $3 paycheck was enough to buy a hamburger, a milkshake and a ticket to the movies, where silent films of the day featured visual action and written gag lines—the same approach he’s used for decades in Marmaduke.

After serving in the U.S. Navy during World War II, Anderson married his high school sweetheart, Barbara, and studied art at Syracuse University on the GI Bill, graduating in 1951 and eventually working for a public relations company in Utica, N.Y. All the while, he sold cartoons to Collier’s Weekly, The Saturday Evening Post and other magazines. Commanding payments of $100 and up for his drawings, he became a full-time freelance cartoonist and, while featuring a shaggy dog in a farm magazine series, came upon the idea of a dog as the center of a family comic strip.

“I didn’t want to do another shaggy dog, though, because I had no interest in drawing all that floppy hair,” Anderson recalls. “I wanted a short-haired dog similar to this big boxer that my mother and stepfather had at the time. He was kind of a funny, clownish dog that I used as a model, but I wanted an even bigger dog.”

He initially drew Marmaduke as a large, menacing animal but soon realized that an unfriendly dog wouldn’t win friends. “I took away the scowl and began to give him more body movement and expression, and the whole drawing changed. He became a very happy dog,” he says.

Anderson developed Marmaduke while working five to seven days a week at home in Vista, Calif….

About the Milton Caniff Award:

THE MILTON CANIFF LIFETIME ACHIEVEMENT AWARD is awarded by unanimous vote of the NCS Board of Directors. It is given for a lifetime of outstanding and accomplished work to a cartoonist who has not previously won a Reuben. It is considered one of the highest honors the Society can bestow.