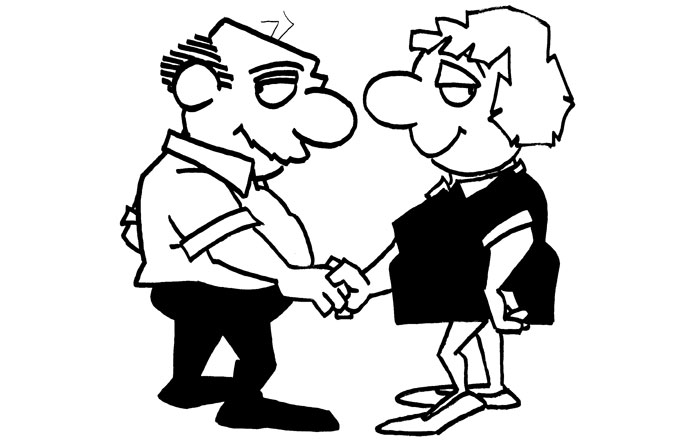 Cartooning legends Bunny Hoest and John Reiner will both be receiving the National Cartoonists Society’s prestigious Gold Key Award at the 68th Annual NCS Reuben Awards in May of 2014 in San Diego, CA.

The Gold Key, awarded by unanimous vote of the NCS Board of Directors, honors the recipients as members of the NCS Hall of Fame.

Bunny Hoest is the writer of several cartoon series, including The Lockhorns, Laugh Parade and Howard Huge, all of which she inherited from her late husband Bill Hoest. She is also the co-creator of Bumper Snickers in 1974, Agatha Crumm in 1977, What A Guy! in 1986 and Hunny Bunny’s Short Tales in 1992.

The Lockhorns, a cartoon panel about a bickering long-married couple, appears in 500 newspapers and is syndicated by King Features.

John Reiner is Hoest’s long-time collaborator, at one point drawing three cartoon series simultaneously: The Lockhorns for daily syndication, and Laugh Parade and Howard Huge for Parade magazine. He has also worked for Marvel Comics and has done freelance advertising art, humorous illustrations and political caricatures.

Hoest and Reiner began working together in 1986, when Hoest’s late husband, Bill Hoest, hired Reiner on as an assistant to help draw the features.

Both independently and collectively, Reiner and Hoest have contributed greatly to the profession of cartooning.

Bunny writes, “it is like the Cooperstown of the cartooning profession and I can’t believe that I, little Bunny Mezz from Brooklyn, was unanimously selected to join this prestigious company. I am so honored.”

Inquiries can be made to Claudia Smith at King Features Syndicate.