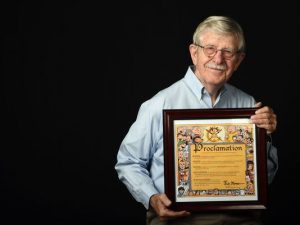 Charlie Daniel, editorial cartoonist for the News Sentinel, was honored recently by the National Cartoonists Society with a special proclamation recognizing his long and distinguished career.

“The NCS Proclamation is a high honor by this national organization and is not given out lightly,” said Tim Oliphant, secretary/treasurer of the Southeast Chapter of the organization. “Only a small few have received this honor or ever will receive this honor.”

The award was presented Oct. 8 at the chapter’s annual meeting in Roanoke, Va.

Daniel was born in Richmond, Va., and grew up in Weldon, N.C. He served in the Marine Corps and studied political science at the University of North Carolina, where he began cartooning for The Daily Tar Heel in 1955.

He was hired as an editorial cartoonist by the Knoxville Journal in 1958, and he moved to the News Sentinel in 1992.

“Charlie has been drawing non-stop for the past 50-plus years,” Oliphant said. “He continues to go into this newspaper every single day doing what he loves to do.”

The NCS was founded in 1946 and its membership today includes more 500 of the world’s major cartoonists.