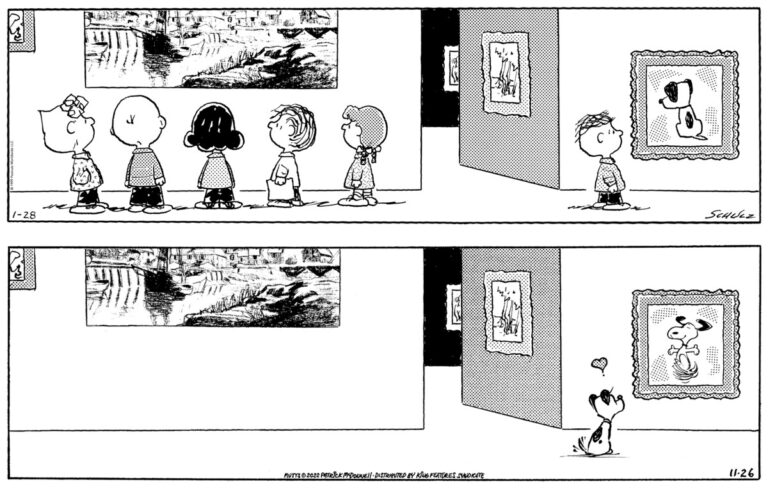 This combination of photos shows a “Peanuts” cartoon by Charles M. Schulz in 1999 showing kids at a museum with one off on the side, gazing at a painting of the dog Earl from “Mutts,” top, and an upcoming “Mutts” cartoon by Patrick McDonnell showing Earl at the museum fondly looking at a framed image of Snoopy. More than 75 syndicated cartoonists have tucked tributes, Easter eggs and references to “Peanuts” in Nov. 26/Saturday’s funny papers to honor the creator of Charlie Brown, Snoopy and company. (Peanuts via AP, top and King Features Syndicate via AP) (Uncredited/Peanuts/King Features Syndicate)

Here’s To You, Sparky!

NEW YORK (AP) — Cartoonists across the nation are celebrating the 100th birthday of “Peanuts” creator Charles M. Schulz as only they can — with cartoons.

More than 75 syndicated cartoonists have tucked tributes, Easter eggs and references to “Peanuts” in Saturday’s funny papers to honor the creator of Charlie Brown, Snoopy and company.

“It’s a tribute to probably the world’s greatest cartoonist,” said cartoonist Patrick McDonnell, who creates the daily strip “Mutts” for 700 newspapers. “After ‘Peanuts,’ the cartoon world changed. I think most working cartoonists today would say he was the inspiration for them to become cartoonists.”

The list of participating strips ranges from “B.C,” “Dennis the Menace” and “Rhymes With Orange” to “Zippy the Pinhead” and “Zits.” Each artist was encouraged to come up with their own way to honor Schulz, who was known as “Sparky.”

John Kovaleski, who draws “Daddy Daze,” has drawn the strip’s father, Paul, and infant, Angus, discussing “Peanuts” on an opened newspaper. “Ba ba?” asks the baby. To which dad replies: “That’s ‘Peanuts’ by Charles M. Schulz. He revolutionized the comics page by adding depth and character and emotion.”

John Hambrock, creator of “The Brilliant Mind of Edison Lee,” drew a visit from World War I pilot Snoopy in his strip and Edison asking his dad for “extra aviation fuel.” The cartoonist has also decorated the family home with framed images of Charlie Brown and Lucy.

“We left it all up to them. Cartoonists are creative people. When you have a daily deadline, you need to have ideas come to you,” said McDonnell. “I think people enjoyed the challenge of coming up with something to express their love and admiration for that guy.”

McDonnell, who is a member of the board of directors of the Charles M. Schulz Museum and Research Center, dreamed up the tribute and he and “JumpStart” cartoonist Robb Armstrong contacted the various cartoon syndicates with their plan.

“I’m pretty confident that when you open the newspaper that morning, the whole comic page is going to be a tribute to Sparky,” said McDonnell. “I’m personally looking forward to the surprise that Saturday to see what people did.”

For his tribute, McDonnell repaid a kindness Schulz gave him. In a “Peanuts” strip from 1999, Schulz drew his cartoon boys and girls visiting a museum and Rerun off on the side looking up with respect at a painting of the dog Earl from “Mutts.”

So, in return, this Saturday, readers of “Mutts” will see Earl at a museum looking up fondly — his little tail wagging — at a framed image of Snoopy. “Mines pretty personal,” McDonnell said.

“Peanuts” made its debut Oct. 2, 1950. The travails of the “little round-headed kid” Charlie Brown and his pals eventually ran in more than 2,600 newspapers, reaching millions of readers in 75 countries.

The strip offered enduring images of kites in trees, Charlie Brown trying to kick a football, tart-tongued Lucy handing out advice for a nickel at what looked like a lemonade stand and Snoopy taking the occasional flight of fancy to the skies. Phrases such as “security blanket” and “good grief” are a part of the global vernacular. Schulz died in 2000.

“’Peanuts’ was everything. I read ‘Peanuts’ books every night, and I wanted to be a cartoonist because of that since I was 4. To actually have my own little cartoon character in ‘Peanuts’ — it still boggles,” said McDonnell. “Every morning I look at it and I still can’t believe it happened.”