Congratulations to the 2021 Cartoonist of the Year nominees!

The nominees are in for the 2021 Cartoonist of the Year! 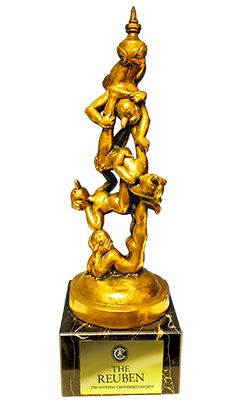 Each year, during the NCS Annual Reuben Awards Weekend, the Society honors the year’s outstanding achievements in all walks of the profession. The recipient of our profession’s highest honor, the Reuben Award for Outstanding Cartoonist of the Year is chosen by a secret ballot of the members.

The Reuben was introduced in 1954 and is named after longtime Honorary President Rube Goldberg. The statue is based on one of Goldberg’s irreverent pieces of sculpture. The eight winners who had received the “Barney,” as the Billy DeBeck Award was dubbed, subsequently received Reuben statuettes and are termed Reuben winners in the Society’s annals. As with all the NCS awards, the winner need not be a member of the Society.

Congratulations to all of this year’s nominees for the year of 2021:

Keith Knight is many things–rapper, social activist, father, and educator among them. He also happens to be one of the most highly regarded cartoonists in America. For nearly three decades, Keith has brought a uniquely personal style to the funny pages that’s a cross between Calvin & Hobbes, MAD, and underground comix. Knight is part of a generation of African-American artists who were raised on hip-hop, infusing their work with urgency, edge, humor, satire, politics, and race. His art has appeared in various publications worldwide, including the _Washington Post, the New Yorker, San Francisco Chronicle, the Nib, Ebony, ESPN the Magazine, MAD Magazine, and the Funny Times.

His comic strip slideshows on America’s racial illiteracy, which he performs worldwide, have earned him a Belle Foundation grant, and a nod in 2015 as an NAACP History Maker.
In 2020, the world was introduced to Knight’s work in a whole new way–as the inspiration for the live-action streaming television series, Woke, courtesy of Hulu. Knight serves as a co-creator, writer, and executive producer on the show, which is in its second season.

At 93, Edward Sorel is the grand old man of New York magazines. For 60 years, his blistering caricatures have lit up the pages of Harper’s, the Atlantic, Esquire, Time, Rolling Stone and the Nation. He is especially revered for his work in Clay Felker’s New York in the late 60s and for work in the New Yorker under Tina Brown and David Remnick. He has also worked for slightly less august titles, like Penthouse, Screw, and Ramparts. He is one of the foundational New Yorkers. Like Leonard Bernstein or E B White, Sorel absorbs the rhythms of the rambunctious city, using them to create an exaggerated, beguiling mirror of all he has experienced. His recent book “Profusely Illustrated: A Memoir” was published by Knopf Publishing Group in November of 2021.

Bill Griffith is a pioneer of the underground “comix” movement. His career has spanned decades and he has left an indelible mark across the entire comics idiom — comic books, syndicated comic strips and graphic novels. His character, Zippy the Pinhead is recognized worldwide and is celebrated as equally absurd and profound. Bill has been teaching comics at the School of Visual Arts in NYC for over ten years. With his graphic novels, Invisible Ink, Nobody’s Fool, and his graphic biopic of Ernie Bushmiller, Bill Griffith has continued to cement his place in the pantheon of comics greats.
Bill is at work now on a fourth graphic novel— a bio of his famous “Pioneer Photographer” great-grandfather, William Henry Jackson.

Hilary is the creator of the award-winning comic strip Rhymes with Orange. At the age of 25, she became the youngest woman cartoonist to ever be nationally syndicated. Her work is published in approximately 300 publications around the world. She won the Silver Reuben for “Best Newspaper Panel Cartoon” four times, in 2007 and 2009, 2012, and 2014.  She teaches Single Panel Cartooning at the Center For Cartoon Studies and tells stories for The Moth and NPR.

Mark is a comic strip writer/artist, animator, and television producer, known for his strips Liō and Heart of the City.  Tatulli is also the author/illustrator of the middle-grade novel series, “Desmond Pucket”. Three books in the series were released: Desmond Pucket Makes Monster Magic (2013), Desmond Pucket and the Mountain Full of Monsters (2014/2015), and Desmond Pucket and the Cloverfield Junior High Carnival of Horrors (2016).

Tatulli released a biographical graphic novel, Short and Skinny in 2018. It chronicles a summer in middle school in which he was inspired by the original Star Wars to make his own parody of the film while dealing with navigating relationships with bullies, friends, parents, and body image.

The winner of the Reuben will be announced on September 16th, 2022 at the Marriott Downtown in Kansas City, MO. Details here.
See all of our previous Reuben winners, visit our Awards section.