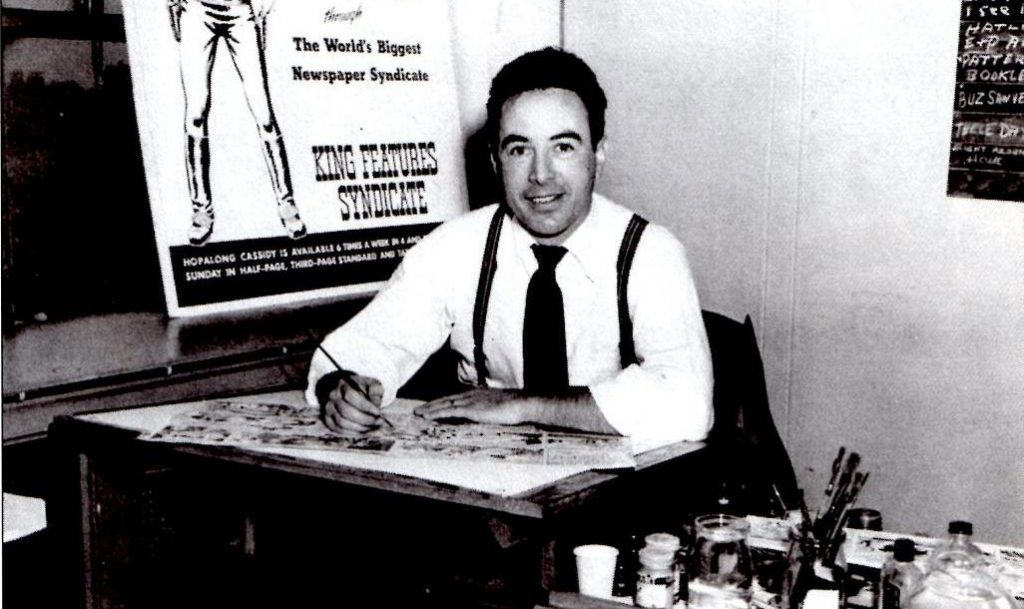 This is an obituary for a man I think was one of the greatest comic book artists who ever lived and inarguably one of the nicest people I’ve ever met. As you may glean from what follows, I really, really loved this person: Loved his artwork in comic books I read long before I ever imagined I’d know him and work with him. Loved the guy who did that artwork and not just because he was a joy to collaborate with and he made my scripts look good and my job, when I was an editor, as simple as it could possibly be.

Dan Spiegle left us on Saturday at the age of 96. He had been in poor health for some time…and it was tough for me to think of Dan that way because until about ten years ago, he was a very healthy individual, often out on the tennis court. Until some time in his seventies, he did most of his artwork standing-up as per the above photo. That was taken around 1973 in his studio, the first day we met.

Dan was born in Cosmopolis, Washington on December 12, 1920. He drew a lot in high school and then in the Navy, where among other duties, he painted insignias on airplanes. Following his discharge in 1946, he attended Chouinard Art Institute in Los Angeles, thanks to the G.I. Bill. Funny story how he got his first real job doing comic art. He answered an ad in the L.A. Times from someone looking for an artist to draw a newspaper comic strip. The address was that of Capitol Records and it turned out the strip was Bozo the Clown.

Years later, Dan could have handled that with ease but at the time, he was more of a serious illustrator so he told the man he met with there that the project was not for him. The man looked at Dan’s samples anyway, noted some fine drawings of horses and said to him — approximately — “My cousin works for William “Hopalong Cassidy” Boyd and they’re looking for someone to draw a newspaper strip. Why don’t you go see him?” The office of the popular cowboy star was only a few blocks away. Dan went directly there and Mr. Boyd, aka “Hopalong” happened to be there and he liked how Dan drew horses, too. Before the day was out, Dan had the job of drawing a Hopalong Cassidy newspaper strip, which he did from 1949 to 1955.

A strip like that would have been a full-time job for anyone else but Dan was very fast so around 1951, he took samples of the strip to the Los Angeles office of Western Printing and Lithography, which produced the Dell Comics line. He walked in, showed his work and walked out with a comic book to draw. He drew for Western for about the next thirty years as the company segued from Dell to Gold Key Comics (explanation here) and only stopped when the firm did. His work there included dozens of different adaptations of TV westerns, including a long and acclaimed stint on Maverick. He drew many of their adaptations of Disney movies and the best-selling comic book, Space Family Robinson, which has recently been reprinted in fancy hardcover volumes. He was also the artist for years on Korak, Son of Tarzan.

His editor for much of this period was a man named Chase Craig, who was also my editor (and mentor) for many years. I once asked Chase, “Of all the hundreds of artists you’ve employed, who was the most reliable?” Without pausing to think, he replied, “Dan Spiegle.” Then he added, “It’s always on time and it’s always wonderful.” (A moment later, he added, “…and Mike Royer.”)

Later, when I became Dan’s editor, I had the same experience…and until you’re an editor of comic books, you don’t realize how rare and precious it is to have someone like that available to you. One time, another artist — a good one, not a newcomer — was six weeks late with a job and then handed in a few, unusable pages. I immediately went to Dan who did the entire job in eight days…and it was perfect.

My own association with Dan started one day in ’72 when Chase asked me if I would take over writing the Scooby Doo comic book. I wasn’t a huge fan of the TV show and started to decline when Chase mentioned that Dan Spiegle was now drawing it. That made all the difference. I had been a fan of Dan’s art for years.

At the age of seven, my parents took me to a movie called Don’t Give Up the Ship, which starred Jerry Lewis. The next day, they bought me the Dell comic book adaptation of Don’t Give Up the Ship to keep me quiet on a visit to my pediatrician and I happened to be holding it when Jerry Lewis walked into that pediatrician’s office to pick up one of his sons. That comic book was drawn by Dan Spiegle.

Scooby Doo was not really in Dan’s wheelhouse at the time but that comic needed an artist and Chase, because Western was cutting back on adventure-type comics, needed an assignment to keep work on Dan’s drawing board. So Dan was attempting to learn a broader, funnier art style and through no help from me, he “got it” about the time I began writing the comic. We became friends and frequent collaborators. We worked together for around a dozen different companies including Scooby Doo for two or three other publishers, Blackhawk for DC and Crossfire for Eclipse. Neither of us made a lot of dough off Crossfire but it was Dan’s favorite project and mine, as well.

The way we worked together was very simple. I’d write a script. I’d send it to Dan. He would draw it, usually having his daughter Carrie do the lettering. He would send it to me. I would make the few corrections necessary and send it off to be printed. Couldn’t have been more harmonious and easy. And the few corrections usually were that Dan would draw some scene so clearly that I would realize some of my dialogue was unnecessary and I’d remove or change it. At least once, I removed all the word balloons and captions I’d written for one page because Dan’s artwork simply didn’t need my silly words telling you what you were looking at.

Other companies grabbed him when I couldn’t keep him busy. He worked for DC, Marvel, Dark Horse and many other publishers. Editors and writers would tell me how much they envied me being able to work as often as I did with Dan and his artistry was much admired by other artists. Gil Kane would say that Dan was the best comic artist ever when it came to “spatial relationships,” meaning that in each panel, the figures and items were placed in perfect proportion to each other, perfectly setting the scene. When I visited Alex Toth, he insisted I always bring him the latest pages I’d receive from Dan so he could study them. Alex clearly envied the organic nature of Dan’s work…how natural his staging was and how well he handled light and shadow.

And I want to underscore that Dan was one of the nicest men I’ve ever met. We never had an argument of any kind. Not one.

I’ll tell you two quick stories about how devoted this man was to his artwork. We did a lot of Hanna-Barbera comics for overseas markets — work that has never been published in this country. Occasionally, the page format changed due to the needs of some foreign publisher.

For one six-page story, I told Dan to draw the pages 11″ by 15″ instead of the 10″ by 15″ page layout we usually used. Dan accidentally drew it 10″ by 15″. It was the only mistake he ever made on anything we did together and he was deeply apologetic when I went the pages back to him and asked him to adjust them.

Anyone else would have just pasted on a half-inch on either side and extended what he’d already drawn. Either that or they’d cut panels out and repast so they didn’t have to draw the whole thing again. Dan redrew the whole thing again on the proper size of paper. I thought that was extraordinary…but then I realized something else.

Anyone else would have traced or copied what he did the first time. Dan had changed every single panel to a new angle. I asked him why he did that and he explained, “Just to keep my interest up. It would have been too boring to draw it the same way twice.”

Soon after that, we had to do a batch of comic book stories for a publisher in South America. The publisher had been publishing terrible, badly-drawn comics and Hanna-Barbera had insisted they better their product by paying to have us do some of the material. The pay was low so I told Dan and the others working on these stories to knock them out fast, not to put in a lot of detail. Even rushed, simplified art by my crew would be better than what the South American published had been running and better than he was paying for.

When Dan’s art came in, it looked just like what he did on the regular, decently-paying art. I thought he’d made a mistake and confused which scripts were supposed to be done with all possible shortcuts so I called him. It turned out he hadn’t been confused. He said, “I drew it the way you wanted it but I didn’t like it and couldn’t hand in something that looked like that. So I redid it so it pleased me.”

At my insistence, he sent me the simpler version. It was fine. The publisher would have been happy with it. But the point is it didn’t please the guy who did it.

How can you not love an artist like that?

I just spoke with Marie, his wonderful wife of seventy (70!) years. She said a memorial will happen sometime in the future. They’d better get a large room because Dan had an awful lot of friends and admirers…those who knew the man himself and those who just knew the work. And then there were us lucky ones who got to be in both categories. He is survived by Marie, four children who made him very proud (and a Grandpa) and around 55 years of top-notch comic book and strip artwork.