DON’T MISS OUT ON THE GREAT NCSF ART AUCTION!

There are a few days left to get your bids in on items in the great 2017 art auction to benefit the National Cartoonists Society Foundation!There are over 80 items from the world of pop culture created by over 70 of the nation’s top cartoonists, illustrators, and animators past and present. While primarily featuring original hand-drawn artwork, also available are limited edition prints, posters, sculptures, books, and other collectibles featuring your favorite characters from comic books, comic strips, and movies. Some of the artists represented in the sale include Bruce Timm, Sergio Aragonès, Stan Sakai, Jack Davis, Jerry Robinson, Hilary Barta, Drew Johnson, Charlie Adlard, J.G. Jones, Patrick McDonnell, Lynn Johnston, Kazu Kibuishi, C.F. Payne, Jan Eliot, Jim Borgman, Rick Kirkman, Nico Marlet, Mo Willems, Paul Coker, Jr., Bill Morrison, Dean Yeagle, Mort Walker, Dan DeCarlo, Dan Piraro, Stephen Silver, and Oscar-winning Pete Docter to name a few. All the money raised will go to the NCSF, a fully licensed 501(c)(3) charity, to help them continue their work in assisting cartoonists in need, providing scholarships to students, and further promoting the cartoon arts which has been the hallmark of the National Cartoonists Society since its inception in 1946.Listings began posting on Ebay.com under seller name NCSFoundation on February 2nd, and auctions will end on Sunday, February 12.All the art may be viewed immediately on a special website from the NCSF found at http://ncsfoundation.blogspot.com 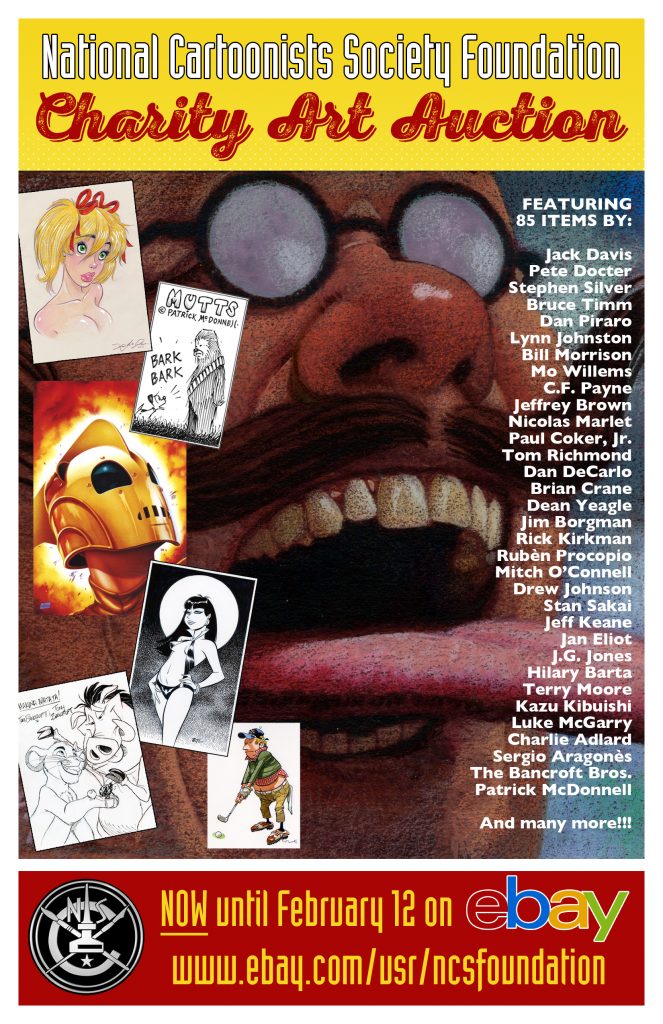