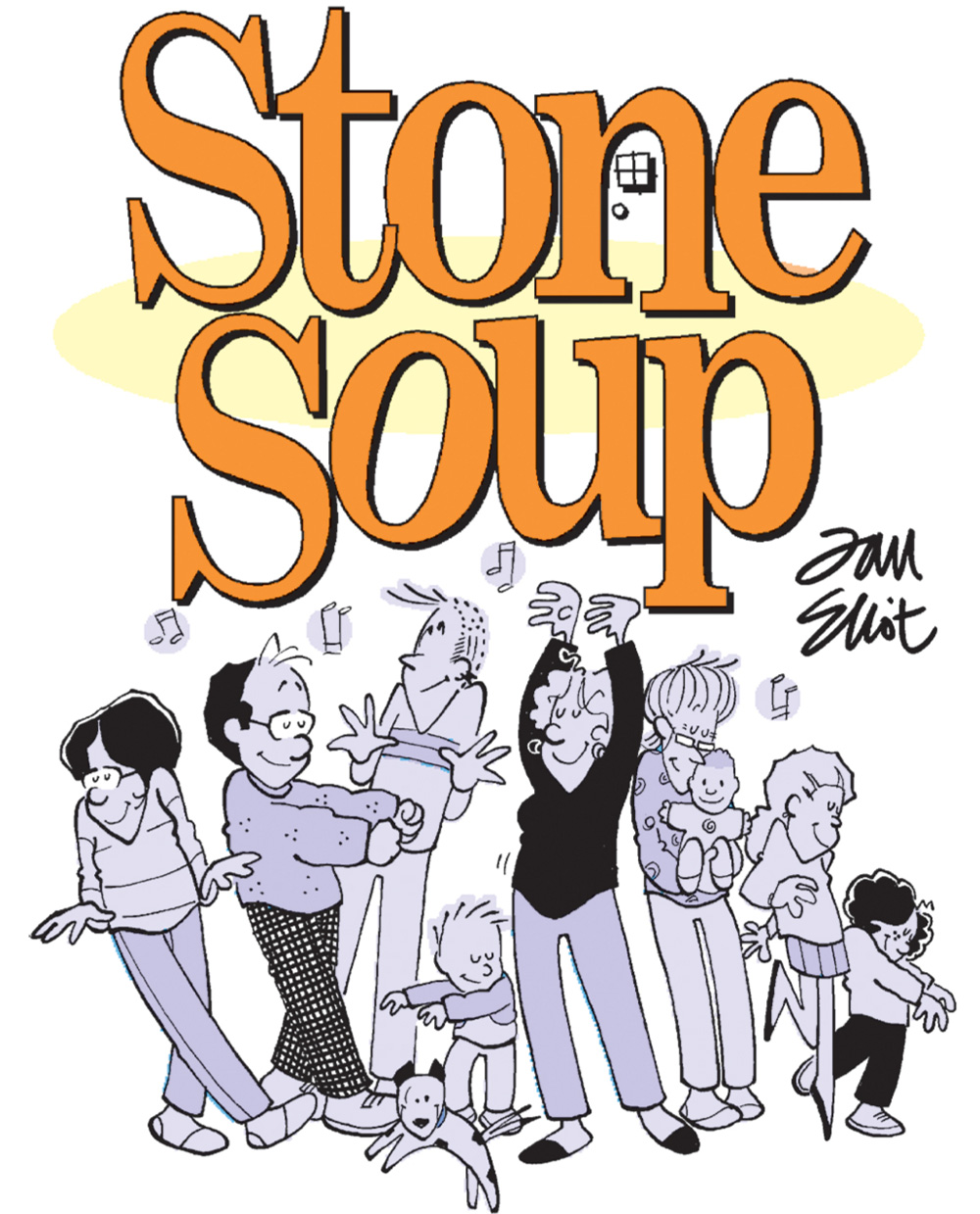 “Every Monday morning, there it is, the blank paper that represents the seven comic strips that need to be created,” Eliot explained. “I have reached a point in life where I’d like to be free of these daily deadlines — free to travel more, spend more time with family and friends, pursue other creative projects. I love to write. I love photography. I’ve always been interested in marine science and scientific illustration. Who knows what might be on my horizon? It is exciting to think about the possibilities. But most of all, I’m looking forward to having just one great cartoon to create every week, to linger over the drawing and ideas and savor the fun of it.”

Originally created in 1990 and syndicated by Universal Uclick (formerly Universal Press Syndicate) since November 1995, the comic strip is available in more than 250 outlets worldwide with a dedicated following. The final week of Stone Soup dailies will begin on Oct. 12, 2015.

“For 20 years, I have held the most wonderful job in the world — making a living in art, creating a daily comic strip that I’m privileged to see published in newspapers,” Eliot said. “As someone who grew up fascinated by newspaper and magazine cartoons, it is hard to explain the private thrill I get seeing my strip on the funny page, hearing someone comment about it, receiving fan mail. But with this wonderful job comes the pressure of daily deadlines. It may seem like a small task, creating one cartoon a day, but it is herculean in many ways. The pressure to be good enough, funny enough, to create interesting-enough drawings, live up to the standards of great cartoonists I admire and share the comics page with is not a small thing.”

A realistic and relevant comic strip, art truly imitates life in Stone Soup. Once a single working mom herself, Eliot feels a special empathy for women struggling to raise their children and make ends meet with too little time, money and patience. She knows only too well that finding the humor in life’s challenges is often the only way to survive, and she conveys this idea through her work.

“I thought long and hard about relinquishing my daily spot on the funny pages,” Eliot said. “I fought to get there, after all. But 20 years is a long time, especially when it comes after my previous incarnations – as a waitress, car salesperson, bookmobile driver, community college instructor, graphic designer and copywriter … all things I did along the way to syndication and that inform my characters and storylines now.”

Stone Soup follows the saga of an extended, blended family, starring two working-mom sisters living just across the fence from each other. Val and Joan share life with their opinionated mother; a middle-school diva and 10-year-old tomboy; a reclusive teenage boy; a wild preschooler and his new baby sister; Wally, the ultimate nice guy who steps in to his stepdad shoes with grace amid the chaos; and Phil, Val’s new husband.

“I am not at all ready to give up my Stone Soup family, which is why I am looking forward to continuing the Sunday strips. I am very grateful I have the opportunity to do that, and I hope my fans will continue to follow the fun and chaos of the Stone clan.”

Eliot began cartooning when she was a single mom trying to raise two daughters, stay fully employed, pay the bills and still have a little fun once in a while. Running for five years in 10 weekly and monthly papers, her first comic strip, Patience and Sarah, featured a single mom and her daughter. Eliot continued cartooning while working as a copywriter and graphic designer and developed a second strip called Sister City, which ran weekly in the Eugene, Oregon, Register-Guard for five years. In 1995, Eliot created Stone Soup. Eliot works from her home studio in Eugene. She has remarried, and her two daughters are grown with families of their own.