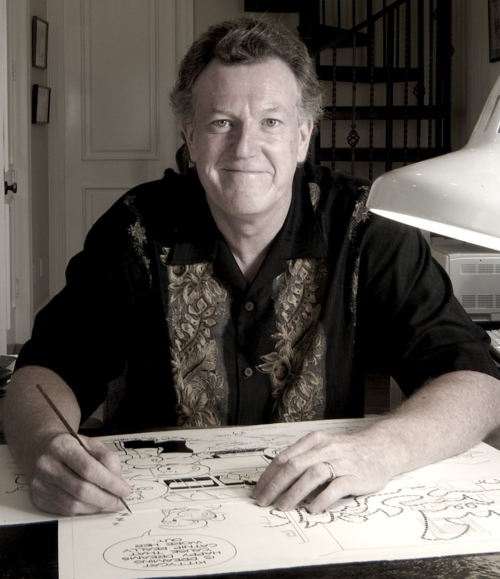 The National Cartoonists Society’s Silver T-Square award is “awarded, by unanimous vote of the NCS Board of Directors, to persons who have demonstrated outstanding dedication or service to the Society or the profession.” Former NCS president Jeff Keane will be honored with the Silver T-Square this year at the 69th Annual NCS Reuben Awards banquet. Jeff is being recognized for his countless hours of work and creative efforts producing and directing the Reuben Awards show and various roasts and other entertainment for the Reuben Weekend for over a dozen years, as well as his other contributions to the Society as both a board officer and as president.

“Few people realize exactly how much time, talent, and energy Jeff has put into the Reuben Awards weekends since the late 1990’s,” current NCS president Tom Richmond said. “Attending members see this terrific program with videos, live music cues, memorial segments, comedic bits, and live numbers that all go so seamlessly it looks easy. Jeff has spent countless hours putting these together, writing for them, writing and appearing in the videos, rehearsing the show and then directing and running it from the control center. He is a very talented performer and director, and his labors have made the Reuben Awards show into an outstanding event for well over a decade.”

“Jeff has also put an enormous amount of time and effort into the Society as a whole. Hs time as a board member and then as a two-term president saw many improvements in the NCS as an organization, including the USO programs. Since his stepping down as president, he’s been one of the principal sources of advice and guidance for the last two NCS boards. I would have a hard time coming up with anyone more deserving of the Silver T-Square.”

The NCS Reuben Awards Banquest is being held May 23rd, 2015 in Washington D.C.