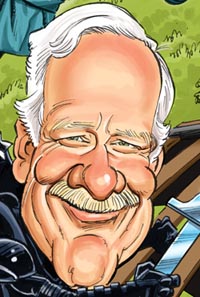 Longtime Universal Uclick editor and President Lee Salem will be honored with the National Cartoonists Society’s “Silver T-Square Award” at the 2013 NCS Reuben Awards Banquet in Pittsburgh, PA on May 25th. Lee has been with Universal Uclick, formerly Universal Press Syndicate, for over forty years, and has been credited many times by comics creators and historians as having helped discover and cultivate some of the most popular comic strips in syndication and fostered the talents of some of the most gifted creators in the industry, including
Garry Trudeau (Doonesbury), Bill Watterson (Calvin and Hobbes), Cathy Guisewite (Cathy), Gary Larson (The Far Side), Lynn Johnston (For Better or For Worse), Richard Thompson (Cul de Sac) and Mark Tatulli “Lio”, and many more. He was editing “Doonesbury” when Trudeau won a Pulitzer Prize for the strip. It was announced in October 2012 that Lee is taking a three-month leave of absence that began Febrary 15th, and will return to Universal Uclick as “President Emeritus” until his retirement on March 31, 2014.

The cartoonists he worked with over the years consistently cite Lee’s contributions to the artform and to their craft that goes far beyond his role as an editor and syndicate president. John P. McMeel, chairman and president of Andrews McMeel Universal, the parent company of Universal Uclick, had this to say on the UU website: “His prescient eye for discovering talent, remarkable skill in nurturing that talent, and tireless pursuit in developing new opportunities and platforms for our creators is unequalled.”

In an article appearing after the announcement of Lee’s retirement, The Washington Post’s Michael Cavna has several quotes from prominent cartoonists about what working with Lee has meant to them:

I think a big part of Lee’s editorial legacy is in bringing to newspapers a new generation of cartoonists — including women — and introducing an entirely new range of subjects and voices to the comics page.

In the strips Universal launched, the writing was paramount, and Lee had a great eye for lively writers and a real understanding of what makes a comic strip work. He always seemed to find strips with highly individualistic takes on the world, and a strong sense of voice. This has become more or less the standard model for newspaper comics now, but it was quite different from the plug-in-the-gag, committee-drawn strips of the ‘50s and ‘60s, and I think it brought the comics a new sharpness and relevance.

Because I admired and respected so many of Universal’s strips, I completely trusted Lee’s judgment in editing my work: I never argued for a strip he questioned.  Of course, his “New England reserve” took some getting used to. In the early days, I’d save a week’s mailing time by handing Lee a stack of roughs to edit whenever he swung through the area on a business trip.  He’d read through a month of my cartoons in a few minutes, and he could have been reading obituaries for all the delight he radiated.  I’d crawl under the couch and lie in a tight ball until he was back on the plane. You can imagine what it was like to negotiate a contract with him.

But of course, that unflappable quality was a real virtue in the other part of his job, which was to step into a circle of furious readers and newspaper editors, and take all the bullets. Lee was a great defender of my work, and I’ll always be grateful for his long and vigorous support.   I’ve really enjoyed having Lee as my editor all these years, and he’s been a great friend to cartooning.

“Lee Salem changed my life.  I always wanted to make comics professionally, and I had been trying for syndication for some time.  But it wasn’t something real until 1997, when I sent a bunch of “Heart of the City” sample strips to Lee through the mail and he called to offer me a development deal. And from then on my life changed.

It was because Lee Salem, the first guy with real comic-strip power, said, “Yes.”

When I first started to work with Universal Press, Lee Salem was my editor. He was the one who suggested the name “For Better or For Worse” for my comic strip, and I have to admit, it suited the work I did.

For the first few months, he worked with me to develop something that had consistency and balance. He was an excellent editor. Writing funny stuff is a personal venture, so the editor who says, “Hey, that’s not funny!” better be right … and Lee usually was.

Whenever I traveled to Kansas City, he’d come to the airport to meet me [in his car]. It was old and comfortable with evidence of kids and family still in the trunk and the door compartments.

The syndicate was then headquartered on the second floor of a plain square building on Squibb Avenue. A dusty plastic jade plant was at the top of the stairs, which gave me comfort. There was a lack of pretense everywhere and a real sense of camaraderie among the staff. Lee’s office was small and cramped, but orderly. He had a window with a view of the farmlands outside and a secretary who sometimes put her dresses on backwards. I was lucky enough to have been there when [co-founder] Jim Andrews was alive. In fact, I think it was Jim who went to bat for me when others might have asked me to wait until I had something worth consideration.

My first impression of Lee was that he was competent, thoughtful, honest and fair. He still is! I was well out of my league with a daily comic strip, but his confidence and easygoing manner made the job so much easier. Lee has a smart sense of humor and he understands good comic timing. He can be funny and fun to be with, but he can also be a tough opponent if need be. We have disagreed, heartily at times, and yet we have never fought. …

I believe his impregnable stare and calm demeanor — when under duress — is kind of a gift. Managing cartoonists can’t be easy. We are all so capable of devastating a weak superior with a withering remark or a hideous drawing that it’s best, perhaps, to keep us guessing when the gloves are off! What I’m saying here is…we all appreciate authority when it comes with class.

Lee is a class act and I’m grateful to have been one of “the cast.”

Late in 2005, out of the blue, I got an e-mail from Lee Salem; his subject line was: “Syndication?” I’d been asking myself the same question since I was about 10 years old, and the answer had always been, “Maybe some other time.” But such is the reputation, sway and authority of Lee Salem that my immediate response was: “Sure!”

In the seven years since that e-mail, Lee has gently guided me into a life-changing career in the noblest calling: newspaper comic strip cartoonist. He didn’t do it alone, of course — it’s taken a team of ace specialists to convince me I know what I’m doing. But Lee’s lower-case e-mails encouraged me like nothing else, and his dinnertime conviviality sure helped, too. I’m proud to call him my editor and friend.”

The Silver T-Square is awarded, by unanimous vote of the NCS Board of Directors, to persons who have demonstrated outstanding dedication or service to the Society or the profession of cartooning. Previous winners can be found here.