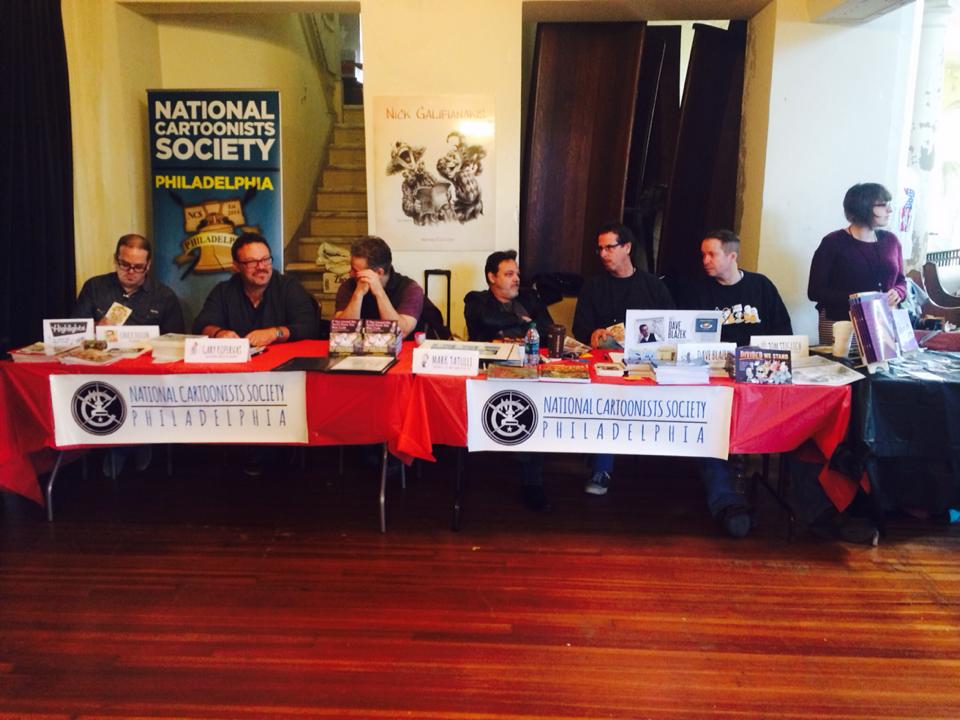 Dave Blazek rallied the Philadelphia NCS Chapter to attend the Locust Moon Comics Festival (http://locustmoonfest.com) this Halloween, at the Rotunda on the edge of the U of Penn campus in Philadelphia, PA. Locust Moon took over the responsibilities of running the Philadelphia Alternative Comics Convention four years ago, and have grown it into the city’s annual showcase for independent cartoonists and comic artists. Though smaller and more intimate that SPX or CAB, it’s become a legend unto itself.

The year was the the fourth annual celebration of comics and graphic arts produced by Locust Moon, the city’s leading alt-comic store, and publishers of last year’s award-winning book Dream Another Dream: Little Nemo in Slumberland. The landmark anthology was so successful that Françoise Mouly optioned it for a ToonBooks version. Art from their most recent graphic novel anthology Prometheus Eternal is presently on exhibit as part of the Philadelphia Art Museum’s current Prometheus Unbound exhibition, giving fine-art recognition to the narrative illustration medium. So in keeping with that philosophy, Locust Moon owners Josh O’Neil and Chris Stevens jumped at the chance to add a crew of nationally syndicated pros to the mix of exhibiting artists and publishers when local historian and collector Rich Greene put them in touch with chapter President Dave Blazek.

Besides, Dave, local members, Chuck Dillon, Gary Kopervas, Nick Galifianakis, Mark Tatulli, Tom Stiglich, and Terry Laban turned out to lend class to the show and spend the day signing books, doing drawings, and generally cutting up like a bunch of cartoonists. Other luminaries such as Publisher/Artist/Author Denis Kitchen, Society of Illustrators VP Karen Green, Mike (Judge Parker) Manley, and Neil (smartypantscomics.com) King were in attendance along with over 100 other exhibitors. The crowd of fans and attendees of all ages was steady all day.