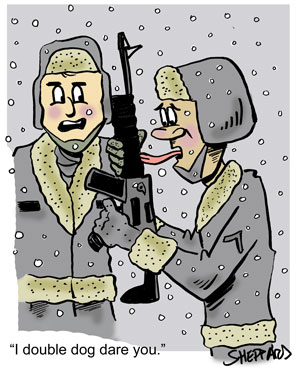 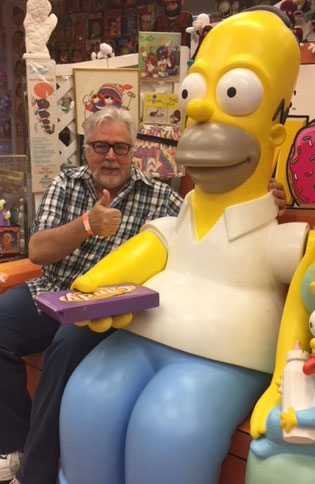 Sheppard was born in a log cabin and walked uphill to school in the snow every day. Not really, it was more like 4 Queens city blocks to Catholic school for the first 8 years. He then took the subway  to high school. After that he traveled on the government’s dime for 5 years and visited several of South East Asia’s best “hot” spots.

He sold his first gag cartoon in the late 70s and has been on fire ever since … albeit a slow burning ember.  A huge fan of the military, like most vets, he started INCOMING as a homage to them. He states with that smart-alecky NYC smirk “no vets or active military have been hurt in the making of these cartoons.”

His work appears monthly in Leatherneck (magazine of the Marine Corps) and an archive of all the INCOMING cartoons(www.incomingcartoons.com)  can be found on the web site above. There are currently 5 books in the INCOMING series.

Shep has also done 2 religious panels (The Good Shepherd and Saints Fun Facts) for almost 10 years for a company in California which distributed them to parishes around the country. His self syndicated weekly panel (Braseltoons) ran in a handful of papers in north Georgia for almost 2 years.

His newest venture, Conservatoons, graphical political commentary … is being shopped around while appearing weekly on 5 conservative FB groups and its own (www.conservatoons.com) web site.