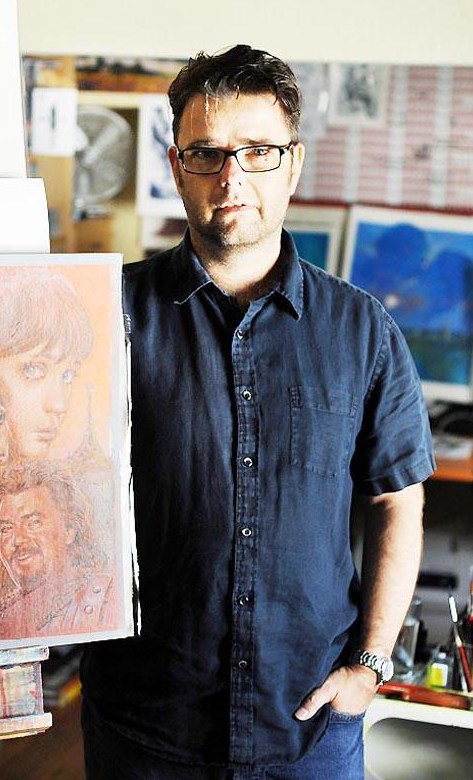 Sean Phillips is a British comic book artist, best known for his collaborations with Ed Brubaker on comics including Sleeper, Incognito, the Criminal series of comics, Fatale and The Fade Out. He has also worked on the DC Comics’ series WildC.A.T.s, Batman and Hellblazer.

Phillips began his career in 1980 in British girls’ comics such as Bunty, Judy and Nikki while still at school. After graduating art college in 1988 he started working with John Smith on New Statesmen and Straitgate, as well as Pat Mills on Third World War both at Crisis. He was part of the British Invasion, getting work on Hellblazer before returning to the UK. There he most notably worked on Devlin Waugh for the Judge Dredd Megazine but also provided the art on a number of series for 2000 AD including Judge Dredd. He returned to the American comic book industry in 2000 when he inked Scene of the Crime written by Ed Brubaker, a writer he would collaborate with a number of times over the following years. He moved on to Wildstorm for a long run on WildC.A.T.s with Joe Casey before teaming up Brubaker on Sleeper. In 2001, Phillips and John Bolton illustrated a three-issue miniseries called User, written by Devin Grayson, and published by DC’s Vertigo imprint. The series explores “sexual identity and online role-playing in the text-based MUDs of the nineties.” User was re-released as a hardcover by Image in 2017. Phillips went over to Marvel Comics in 2005 where he co-created Criminal with Brubaker at the Marvel imprint Icon and he also became the main artist on the first two instalments of the Marvel Zombies series with Robert Kirkman. Recent work includes Incognito, another series with Brubaker at Icon and a US reprint of 7 Psychopaths at Boom! Studios. Phillips has also provided the art for the Criterion Collection release of the 1961 noir film Blast of Silence, as well as the art for the Criterion release of the 1957 legal drama 12 Angry Men, based on a design by Eric Skillman. On 9 April 2011 Phillips was one of 62 comics creators who appeared at the IGN stage at the Kapow! convention in London to set two Guinness World Records, the Fastest Production of a Comic Book, and Most Contributors to a Comic Book. With Guinness officials on hand to monitor their progress, writer Mark Millar began work at 9am scripting a 20-page black and white Superior comic book, with Phillips and the other artists appearing on stage throughout the day to work on the pencils, inks, and lettering, including Dave Gibbons, Frank Quitely, John Romita Jr., Jock, Doug Braithwaite, Ian Churchill, Olivier Coipel, Duncan Fegredo, Simon Furman, David Lafuente, John McCrea, and Liam Sharp,[11] who all drew a panel each, with regular Superior artist Leinil Yu creating the book’s front cover. The book was completed in 11 hours, 19 minutes, and 38 seconds, and was published through Icon on 23 November 2011, with all royalties being donated to Yorkhill Children’s Foundation. In 2012, Phillips was one of several artists to illustrate a variant cover for Robert Kirkman’s The Walking Dead No. 100, which was released 11 July at the San Diego Comic-Con. Phillips and Ed Brubaker launched their Fatale series at Image Comics in January 2012. The series was initially announced as a twelve-issue maxi-series but was upgraded to an ongoing title in November 2012. Jesse Schedeen of IGN stated that “You can’t go wrong with a Brubaker/Phillips collaboration. Even so, Fatale is making a strong case for being the best of their projects.” In October 2013, Phillips and Brubaker signed a five-year contract to produce comics exclusively for Image. Under the terms of the deal, Image will publish any comic they bring to them without having to pitch it to them first.