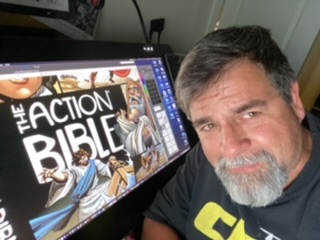 Sergio Cariello (born April 23, 1964 in Recife, Brazil) is a Brazilian-American comic book artist.
He has done work for many major comic publishers through his career, including Marvel Comics and DC Comics,
as well as popular independent companies like CrossGen Comics and Dynamite Entertainment.
He is the younger brother of comics artist Octavio Cariello.
Sergio Cariello knew he wanted to be a cartoonist at age 5. At age 11 he created “Frederico, the Detective,” a weekly comic strip
for his local paper. He wrote and drew the whole strip himself.
It ran until he was 14.
Cariello worked on his first comic book, “Dagon, the Worlds of HP Lovecraft,” while attending the Joe Kubert School of Cartoon and Graphic Art.
During his second year at the school, Virginia Romita hired him as a Bullpen Letterer at Marvel.
While there he was given pencilling assignments on Daredevil and Marvel Comics Presents: Spellbound.
When Pat Garrahay moved from Marvel to DC, he offered Cariello pencilling duties on Deathstroke.
At DC he also did work on Guy Gardner, Steel, Wonder Woman, Green Lantern, The Flash, Young Heroes in Love, Blue Beetle, Batman, and Azrael, among others.

At the Kubert School he taught several courses over 7 years.  Cariello was the artist of The Lone Ranger for Dynamite Entertainment, which got an Eisner nomination in 2007. He also did the art for Son of Samson series with writer Gary Martin for Zondervan. And illustrated The Action Bible, conceived as an updated version of LeBlanc’s The Picture Bible for David C. Cook Publishing, which was released on September 1, 2010.[1][2]

After finishing the Action Bible he went on working on more comics such as GI Joe, Tarzan, Spider-Girl, Superman, Daredevil and others