This is the fourth of a series of posts by NCS member John Lotshaw, detailing the development of a new comic strip, from start to finish. In this series, John will guide us through the creation of “Ray Blaster in Blazin’ Phazers”, giving insight into the creative and business processes involved.

In the last, rather belated blog posting, I began to examine the process of developing the character that will be known as Ray Blaster. I began by examining the character’s role in the strip and how that will influence the character’s personality and design. When I left off, I had hit a bit of a roadblock in the design, and was looking for inspiration to move forward.

At this point, I did what we all do when we’re stumped by a problem of some sort: I set it aside and waited for my muse to whisper to me. The project lay fallow for quite some time, on the order of several months. The creative log jam was broken thanks to a fan of Bill Holbrook’s Kevin and Kell. I was manning a table in the Dealer’s Room with Bill at Anthrocon in Pittsburgh in the summer of 2012. One of Bill’s fans came up and spoke to us. During the conversation, I was mesmerized by a tuft of hair in the center of his brow that looked like an old-fashioned handlebar mustache, only on the top of his head. It was a very striking feature.

That’s when it hit me. That could make a good design element for the lead character I’d been struggling with. It could be the missing key to the whole thing! So, with my muse mumbling in my ear, I whipped out the following sketches (click to enlarge): 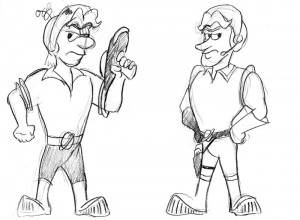 The first sketch was promising enough to realize that I was onto something. There was still a missing element, but the hair tuft was a major step forward. The second sketch is very close to what I was hoping for. All I had needed to add was strong jawline. Now some facial studies were in order…

Other than the fact that the third one looks kind of like Shaggy from Scooby Doo, Where Are You? if he were to shave off his little goatee, this is working good. Next thing to do was to try color.

I pulled out my Copic markers and did a color study of the character. 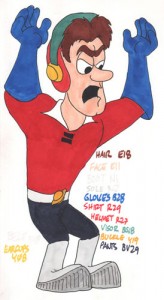 Perhaps a little tweaking is order, but nothing major. I’m liking this look. But there’s still something missing: a name.

What’s in a name?

It’s no secret that the character is going to be named “Ray Blaster”. After all, it’s right up there at the top of this post. Where did that name come from, and what does it (as well as the character design) mean for the personality of the character?

Up to this point, I had been using the name “Rodney” for the character’s name.  I actually had used the name in a pitch for a safety-oriented property based on the first character I was ever paid to work on, a talking kangaroo named Troo the Trauamroo. I liked the incongruity of a dashing space hero named “Rodney”. However, it wasn’t sitting well enough for me. It didn’t seem right. He needed a name not unlike pulp heroes of the past.

There’s a recent character that nailed the naming thing. Toy Story‘s Buzz Lightyear has the perfect name. So perfect, in fact, I almost hate Pixar for coming up with it. The first name is monosyllabalic. The fact that it’s also the same as Apollo 11’s LM Pilot, Buzz Aldrin (who actually legally changed his name to “Buzz”) makes it work even better. The last name is futuristic, like something out of The Jetsons. Plus, it fits in the same meter as two great science fiction comic heroes: Buck Rogers and Flash Gordon.

So, with a template in mind, I began to try to come up with a name that would fit all these criteria.

And promptly ran into a brick wall. Again.

Then, when I least expected it, my muse slapped me in the face with the Fish O’ Inspriation (see the previous post to figure out what I’m talking about.) And, like the Monty Python skit I referenced, a body of water was involved.

Off the deep end

I was doing laps at my local pool. I wasn’t thinking about anything but which lap I was on and what I was going to eat for breakfast when I got back to my house. Not at first, anyway.

Somewhere around my eighth lap, my mind started wondering. I was thinking over some story ideas I’d had for this property. About two laps later, a title had formed: Ray Blaster and the Mermaids of Deuteria (the story would concern a planet covered with heavy water or deuterium oxide, which would be of great value to space travelers). The title smacked of a Republic movie serial from the 1940s. And that name has just the right ring to it as Buzz Lightyear or Buck Rogers.

It was perfect. It had every quality I wanted. Excited by this flash of inspiration, I finished my laps and hurried home. A quick search on Google did not turn up any characters named “Ray Blaster”. Another search of the USPTO database also came up with no results. I couldn’t believe my good luck! The name is just too, too perfect for this use. The missing piece had fallen into place.

At this point, things are going well. Nothing can stop me now!