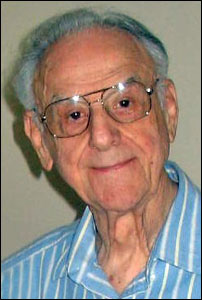 Morris Weiss, an artist and writer who contributed to numerous comic strips and comic books from the 1930s to 1970s, died at his home in West Palm Beach, Florida, on May 18. He was 98 years old.

The youngest of three children, Morris Samuel Weiss was born in Philadelphia on August 11, 1915, and grew up on Manhattan’s Lower East Side. In high school he studied sign painting and was encouraged by a sympathetic teacher to pursue his interest in art. As a young man, Weiss visited many prominent artists and illustrators in New York City, a number of whom gave him the original artworks that would form the foundation of his collection of American illustration.

Weiss’s early jobs included working as an assistant on the comic strips Minute Movies and Joe Jinks; he returned to Joe Jinks as the strip’s artist in the early 1940s. Between 1934 and 1936 he lettered for Harold Knerr on the Katzenjammer Kids comic strip, and worked simultaneously for Fleischer Studios. In 1940 he created the syndicated strip It Never Fails, at the same time attending the Art Students League of New York to study anatomy. It was there, in George Bridgman’s class, that he met his future wife, Blanche; they married in 1944.

The comic strip with which Weiss had the longest association was Mickey Finn, for many years assisting the feature’s creator Lank Leonard, and later taking the strip over after Leonard’s retirement in 1968. He also wrote the stories for Joe Palooka during much of the 1960s, following the death of the strip’s creator, Ham Fisher. Weiss recalled having turned down offers to continue the comic strips Terry and the Pirates and Nancy after their creators departed. Weiss proposed that the National Cartoonists Society begin a fund for indigent cartoonists, an idea implemented by Alex Raymond as the Milt Gross Fund, which today is part of the National Cartoonists Society Foundation. 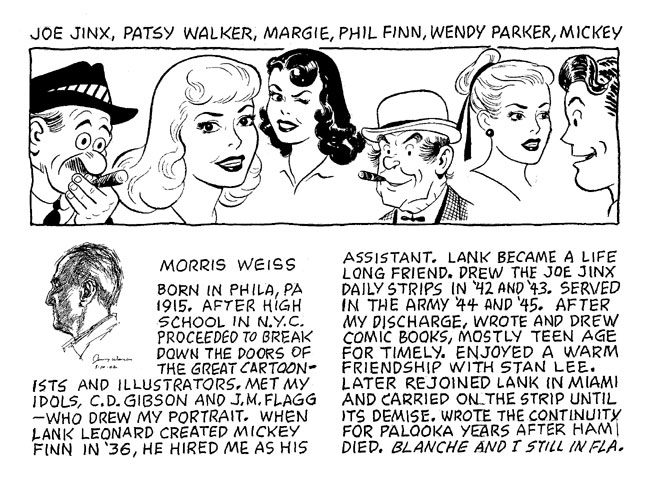 Weiss worked on comic books starting in the mid 1940s, sometimes using the pseudonym Ink Higgins. In the army in 1944 and 1945 he was the staff artist for the camp newspaper at Newport News, Virginia. After the war he worked for Stan Lee at Timely Comics, the forerunner of Marvel, where he wrote and drew Tessie the Typist, Margie and Patsy Walker.

In 1960 Weiss moved from the New York City area to North Miami, Florida, in order to continue working with Leonard on Mickey Finn. Along with his wife Blanche, also an artist, he established the Miami Society for Autistic Children, to assist in the care of his son David, and to help other families with autistic children. Weiss retired from cartooning in 1976, but continued to collect illustrations and cartoons; his collection was featured in several museum exhibitions. He donated many of his own original Mickey Finn cartoons to Emerson College in Boston.

Weiss is survived by his wife, Blanche, a daughter, Wendy, and three sons, Jacob, Jerry and David.