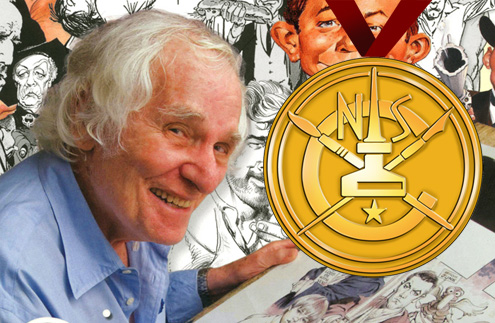 The incomparable Mort Drucker will be the inaugural honoree of  the “NCS Medal of Honor” at the 69th Annual NCS Reuben Awards taking place in Washington D.C. on May 23rd, 2015.

The NCS Medal of Honor is a new award instituted by the NCS board of directors in the fall of 2014, and Drucker was chosen as the very first recipient of the Medal by unanimous vote. The Medal of Honor is a lifetime achievement award bestowed upon a cartoonist “in recognition of a long and distinguished career of continued excellence in cartooning that has set the highest of standards and inspiration.”

Drucker began his career as an assistant on the comic book Debbie Dean, Career Girl in 1947. Quickly moving on as a “retouch” artist for DC comics where he corrected work on many DC titles, he eventually took on the full art duties on DC titles like War Stories and The Adventures of Bob Hope. In the early 1950’s he began freelancing, and his work has appeared in countless books, magazines (including several covers for TIME), movie posters, and advertising. In the mid 80’s he collaborated on a daily comic strip called Benchley, syndicated by the Register and Tribune Syndicate. It was in 1956 when he began working for MAD Magazine that his best-known work would begin. In the pages of MAD his gift for caricature and comic storytelling elevated the magazine’s film and television parodies to the status of pop culture icons. His MAD parody work both created and defined the film/TV satire genre, earning him the praise of notable Hollywood actors and directors as well as fellow cartoonists for over half a century. Drucker has won numerous awards from the NCS, including the Reuben Award for “Outstanding Cartoonist of the Year” in 1987.

According to NCS president Tom Richmond, the NCS Medal of Honor is a sister award to the “Milton Caniff Lifetime Achievement Award”, which was instituted in 1994 and is only able to be awarded to an artist who has not previously won the Reuben. Richmond felt excluding some of the greatest cartoonists of all time from being honored for lifetime achievement was a situation that needed addressing.

“Over the years I have fielded many inquiries about why certain artists have not been honored by the Caniff, which was the NCS’s only lifetime achievement award,” Richmond clarified. “I had to explain over and over that the Caniff was created to honor cartoonists who had not won the Reuben, and if an artist had won the Reuben they were ineligible for the Caniff. That seemed to be counter intuitive. How can you eliminate anyone from being honored for a lifetime of excellence in our profession because they once received an award for one year of outstanding work?”

After discussing the issue, the NCS board decided to create a second lifetime achievement award that could be bestowed on past Reuben winners, rather than redefine the by-laws governing eligibility for the Caniff award.

“The Caniff was created to honor cartoonists who had never received the Reuben but who had a long and distinguished career of excellence that deserved recognition,” Richmond explains. “We felt the spirit of that award needed to be kept intact. Creating the Medal of Honor was an obvious solution. Now any cartoonist can be considered for an NCS lifetime achievement award. If they’ve never won the Reuben, they would receive the Caniff. If they have won the Reuben, they would get the Medal of Honor. Both are NCS Lifetime Achievement awards, and once you are recognized by one you don’t need the other. ”

As for Mort Drucker being the first recipient of the Medal, Richmond said: “That was a very quick nomination and unanimous decision by the board. When every year in their acceptance speeches at the Reubens multiple award winners cite Mort as one of their biggest inspirations, it’s pretty obvious the influence his work has had over the last fifty plus years.”

“He’s a cartoonist’s cartoonists, and the personal hero of many… including myself. Mort is a very deserving and fitting first honoree of this award.”