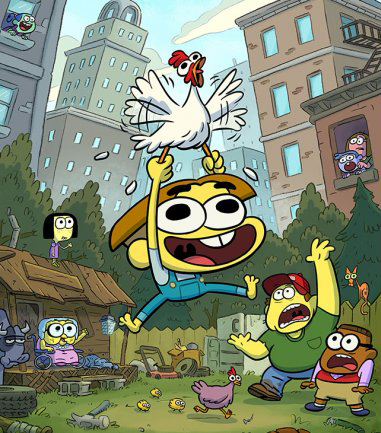 “BIG CITY GREENS centers on Cricket Green, a mischievous and optimistic country boy who moves to the big city with his family. Cricket’s curiosity and enthusiasm leads his wildly out of place family on epic journeys and into the hearts of his new neighbors. Director Rob Renzetti (GRAVITY FALLS) serves as executive producer and the Houghton brothers serve as co-executive producers.“

In 2009, Chris Houghton was the winner of the National Cartoonists Society Foundation’s second annual Jay Kennedy Memorial Scholarship for his excellent cartooning work as a college student. Upon graduation, Houghton entered the field of animation and joined the ranks of the NCS as a professional. Houghton has previously worked on television shows such as GRAVITY FALLS,HARVEY BEAKS, ADVENTURE TIME, WANDER OVER YONDER, and the MICKEY MOUSE shorts.

Chris and Shane (a writer) have previously collaborated on projects, most notably in comic books with their REED GUNTHER series published by Image, and THE SIMPSONS stories for Bongo Comics. Chris has also created covers for comic books such as ADVENTURE TIME, and MAD.

The National Cartoonists Society offers congratulations to the Houghton brothers for their new achievement in animation, and looks forward to seeing their efforts when BIG CITY GREENS comes to television through the Disney XD channel.