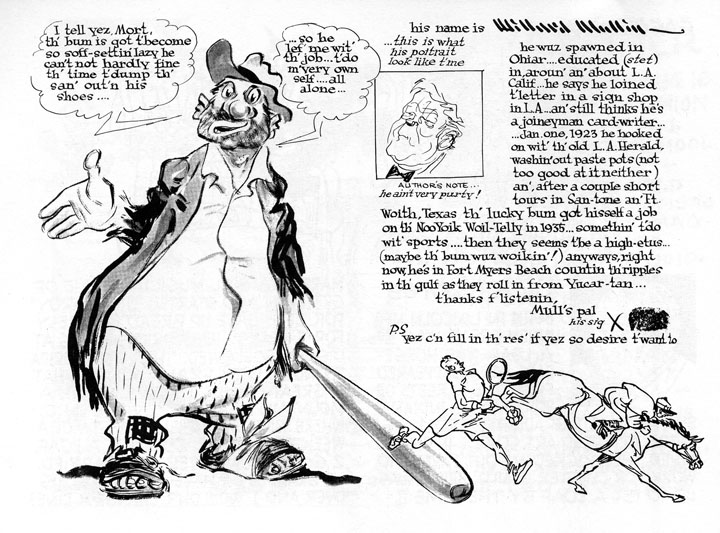 Looking at this 1951 basketball illustration from Collier’s magazine, its no wonder Willard Mullin has been called the greatest sports cartoonist of all time. With his remarkable ability to imbue the human face and form with a sort of expressive elasticity that enhances action and motion to the nth degree, Mullin provided a template for a legion of cartoonists to follow. One friend commented recently that surely the great Jack Davis, for instance, must have found inspiration in Willard Mullin’s work. No doubt!

In the book, The Complete Guide to Cartooning, author Gene Byrnes accurately described the artist’s ability to portray “violent action” as being “in a class by itself”. Willard Mullin was born on a farm in Franklin, Ohio in 1902. His family moved to Los Angeles when he was just 6 years old and he went to work in a department store sign shop immediately upon finishing high school. He stayed for just two years before quitting to take a job with a construction firm. One day on the job he fell from a dam and nearly broke his neck! After his injuries healed he decided he wanted to be an artist after all. Mullin found work at The Los Angeles Herald newspaper, where he learned a variety of graphic arts skills – those too menial for others in the department to bother with. Gradually, he worked his way up to photo retouching – but not with an airbrush… Mullin learned the more traditional (and far more difficult) manual fashion of painting in thin layers of wash. He insisted that this meticulous training under the pressurized environment of a daily newspaper deadline gave him his facility with a brush and the ability to work fast. Mullin stayed at The Herald for twelve years, developing his cartooning abilities at night after putting in a full day at his regular art department chores. When he finally left for new York, it was at the invitation of Joe Williams, executive sports editor of the World-Telegram. There he produced 6 cartoons a week, month in and month out, and never missed a deadline, even while doing advertising illustrations and pieces like these for Collier’s and other national magazines, on the side. In spite of the astonishing volume of work he produced, Mullin, the consummate professional, found his job got easier and easier over time. In a 1957 article for American Artist magazine, he told interviewer Norman Kent, “One builds up a background over the years of witnessing sporting events. The unexpected often happens and personalities in sports are always grist for my mill.” In the spring of 1957, American Artist magazine editor Norman Kent paid a visit to the home studio of Willard Mullin. The magazine had requested to witness the artist at work for a step-by-step article for their summer issue. Specifically, the editors had asked Mullin to do for them a drawing of his most famous recurring character: “The Brooklyn Bum”. Twenty years earlier, during the 1937 baseball season, Willard Mullin was leaving a Brooklyn Dodgers game. He had just watched the team split a double header. By winning the first game the Dodgers had climbed into the upper half division, but by losing the second they fell back where they had been. Mullin was climbing into a cab bound back to Manhattan when the cabbie inquired, “Well, how did our ‘bums’ do?”

It was, for Mullin, an epiphany. In the pages of the Scripps-Howard newspapers that ran his cartoons, Mullin had already characterized (with affection) the Dodgers as a clown – and now, with a little refining, he decided to recast the team as a ‘bum’. Twenty years later the lovable “Brooklyn Bum” was still going strong, his expressions and attitudes, his circumstances and situations, rising and falling in conjunction with the Dodgers’ fortunes. While the step-by-step doesn’t reveal anything unexpected (Mullin’s technique and materials were, as Norman Kent described “simple in the extreme”), its still always fun to see the process of a talented artist’s work taking shape. One interesting note is that Mullin credits his early experience working in the sign shop of an L.A. department store as providing the beginnings of his skill at lettering. The drawing, an actual assignment for the New York World-Telegram, was begun at 11:00 a.m. that day under the watchful eye of the AA photographer and interviewer Norman Kent. Kent describes the events of the day unfolding, “over a period of the next two hours, interrupted by conversation, photography, and a pleasant break for luncheon.” “With the final lettering added to the ‘balloons’ and the papers in O’Malley’s pockets, the drawing was finished. after a few minutes of critical appraisement, Willard added a few penciled notes to the engraver in blue pencil, rolled up the drawing, encased some folding money under a rubber band, and dashed off to the railroad station – a block away.” “As the 3:50 train for New York pulled in, he handed the drawing to the conductor, who happily removed the ‘fee’. On arrival in New York, the conductor would take it to Western Union in Pennsylvania Station.” “A few minutes thereafter, the drawing would be delivered by messenger to the engraving department of the paper to be ‘shot’ for next day’s edition. It appeared on schedule in the World-Telegram and Sun on Friday, April 12, [1957].”