NEW INTERNATIONAL CARTOONING AWARD TO BE PRESENTED AT UK FESTIVAL 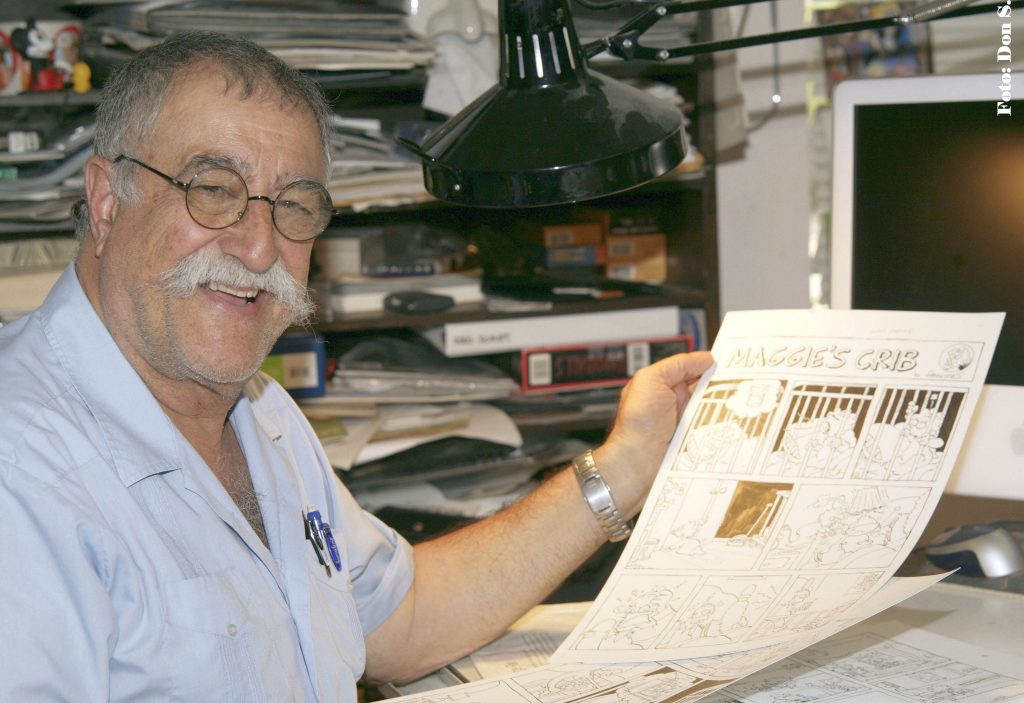 The National Cartoonists Society, in partnership with the Lakes International Comic Art Festival has announced the creation of The NCS Sergio Aragonés International Award for Excellence in Comic Art. This honor, named for the famed MAD Magazine cartoonist, will be given annually to an exceptional comic artist, animator, or cartoonist at the Lakes Comic Art Festival beginning in 2017.
The NCS is known for its annual presentation of the Reuben Award for Outstanding Cartoonist of the Year, the highest and most coveted award in the field of cartooning in the United States and Canada. NCS president, Bill Morrison explained, “The NCS Sergio Aragonés Award was created to reach beyond North America and recognize and honor outstanding artists who work in the cartoon and comic arts in all corners of the world. ”
NCS Foundation president, Steve McGarry made the announcement in Kendal to the attendees and guests of the Lakes Festival Friday during the festival’s opening night program. McGarry stated, “The National Cartoonists Society has a proud 70 year tradition of honoring the best cartoon and comics artists in our profession through the annual NCS Reuben awards.
Although artists from as far afield as the U.K., Australia and the Far East have been honored in the Reuben Awards, I’m delighted that the Society has partnered with the Lakes Festival to create this new award that’s specifically designed to celebrate outstanding international talent. It’s also very appropriate that the award will be given in the name of one of the world’s most acclaimed and beloved cartoonists, the legendary Sergio Aragonés.”
A jury comprised of Sergio Aragonés, the sitting National Cartoonists Society president, the sitting NCS Foundation president, and two principles of the Lakes International Comic Art Festival will convene annually to select a recipient. The honoree will then be invited to attend the festival as a distinguished guest and receive the award.
Julie Tait, Director of the Lakes Festival remarked “Sergio Aragonés is an icon and inspiration to cartoonists across the world and the National Cartoonists Society consists of some of the leading lights of the medium, both icons and new talent. Our festival aims to be truly international, to celebrate all genres of comic art and to encourage people to recognize comics as representing great art for everyone. This new award is a major new step towards our goal and we are extremely honored and grateful to the NCS for this opportunity”.

The Lakes International Comic Art Festival is the only one of its kind in the UK. Celebrating the world of comic art in all its guises, it is an annual weekend festival that takes over the town of Kendal on the edge of the Lake District each October. It features a formal events program of live draws, performances, films and presentations, a free family zone, workshops, exhibitions, a “marketplace”, windows trails and more. It is truly international with leading creators from across the world and representing all genres of comic art attending as guests. The festival recognizes both pioneers and icons in the field, as well as up-and-coming talent. It appeals to existing fans and also attracts new audiences. It also commissions new work and works in partnership with international festivals and organizations, including the NCS.
www.comicartfestival.com

The National Cartoonists Society (NCS) is an organization of professional cartoonists with regional chapters in the United States and Canada. The Society had its origins during World War II when groups of cartoonists joined together to entertain troops overseas. They enjoyed each other’s company and after the war decided to meet on a regular basis. In 1946 the NCS was born.
NCS members work in many branches of cartooning, including advertising, animation, newspaper comic strips and syndicated single-panel cartoons, comic books, editorial cartoons, gag cartoons, graphic novels, greeting cards, magazine and book illustration and web comics.
The organization’s primary purposes are “to advance the ideals and standards of professional cartooning in its many forms”, “to promote and foster a social, cultural and intellectual interchange among professional cartoonists of all types” and “to stimulate and encourage interest in and acceptance of the art of cartooning by aspiring cartoonists, students and the general public.”
www.reuben.org