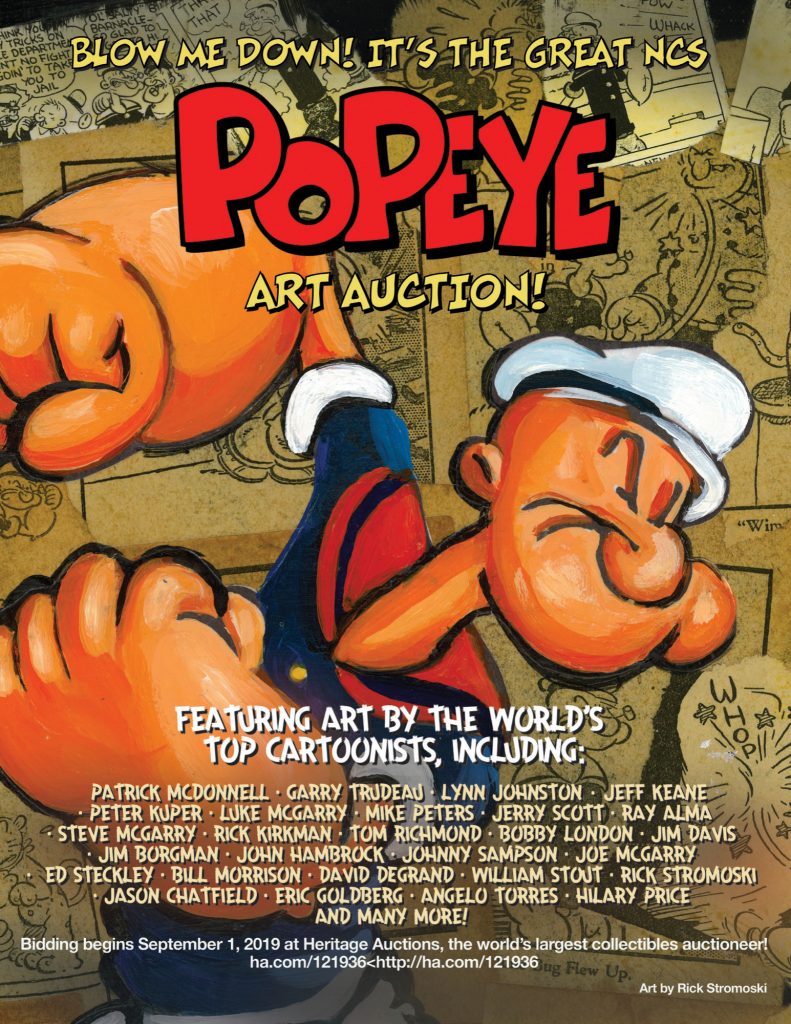 2019 marks the 90th anniversary of the first appearance of everyone’s favorite spinach-munching sailor, Popeye, in E.C. Segar’s celebrated newspaper strip Thimble Theatre. Popeye’s heartthrob, Olive Oyl was one of the original cast members of the strip when it premiered in 1919, making this Olive and the Thimble Theatre cast’s 100th birthday!

The National Cartoonists Society is celebrating the jubilees of these two beloved comic strip and cartoon characters with an auction of original artwork by its members that will benefit the NCS Foundation.

Earlier this year, in the days leading up to the inaugural NCSFest in Huntington Beach, California, NCS members were asked to create original works of art in tribute to Popeye and his cast of characters for a special group exhibition at the Huntington Beach Art Center. The response was overwhelming and the exhibit was one of the highlights of the festival. Members were also asked if they would be willing to donate their original art for this special auction.

The auction will be conducted online through Heritage Auctions from September 1-8. The more than 70 artworks may be viewed now at Heritage Auctions, and interested buyers may also register to bid there.

Proceeds from the winning bids in this special auction will go to the NCS Foundation, a registered 501(c)(3) charity that works in tandem with the National Cartoonists Society to advance the ideals and standards of the cartooning profession, to stimulate and encourage aspiring cartoonists through scholarships and educational programs, and to provide financial assistance to cartoonists and their families in times of hardship.