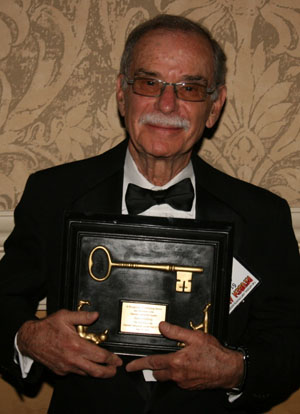 It’s with great sadness that the NCS passes on the news that comic book legend Stan Goldberg passed away Sunday, Aug 31st, at age 82 from complications of a severe stroke he suffered a few weeks earlier. Stan and his wife Pauline were two of the most wonderful, friendly and genuine people The Lovely Anna and I ever had the privilege of getting to know through the National Cartoonists Society… and that is saying a lot as we count many, many NCS members as very good friends.

Stan had the kind of career in comics that in some ways flew under the radar, but in others was one of rare influence and greatly respected by industry pros. He was best known as a principal artist for Archie Comics for well over 30 years, but he also freelanced for many others. He worked in comics starting in 1949 for Timely Comics, which would become Atlas and then Marvel, and was the colorist  int he 60’s for Marvel’s early titles, coming up with many of the color schemes for the costumes for The Fantastic Four, Spider-Man, The Hulk and other eventual staples of the Marvel superhero world. After a split with Archie in the last few years, Stan continued to work for companies like Bongo, DC and others on a variety of titles.

Stan was such an easy person to talk to. Soft spoken, he had so many stories of the old days in the Marvel bullpen, his time with Archie and the people he’d met and worked with you could completely lose track of time listening… yet at no time did you ever get the feeling any of the things he said were about himself. He had a joy for comics and cartooning that was infectious.

The last few years at the Reuben Awards were special ones for Stan and Pauline. In 2012 in Las Vegas, the NCS honored him with the “Gold Key” award, inducting him into the NCS Hall of fame. A very humble man, Stan was really moved by the recognition, but it was undeniably well-deserved. You should know you are a big deal in the world of comics when Stan Lee sends in a long video tribute to you for your award presentation! It was wonderful to see him get that award.

This past year was another special Reubens for the Goldbergs. Back in October of last year, Stan and Pauline were involved in a terrible car accident that badly injured them both. I was told that one of the first things they said after beginning their long roads to recovery was that they were determined to get better and go to the Reubens in San Diego that following May. In fact, they had their room booked right after the accident as incentive. At the Reuben Awards dinner we recognized them and let them know how glad we were they were there and how important they are to the NCS family with a thunderous round of applause. They are such special people. Little did we know we were also saying goodbye to Stan.

I saw Stan and Pauline back in June at the annual NCS “Bunny Bash” party hosted by Bunny Hoest-Carpenter in her backyard on Long Island, and I had a chance to sit and talk for a good long time with Stan about things. I almost did not make it to that event, and I am sure glad I did.

It was a delight and a privilege to know Stan Goldberg. I am sure I speak for all the members of the NCS when I say our collective hearts go out to Pauline and the Goldberg family. The NCS and the world is a little poorer place tonight, and our hearts are heavy. Peace, Stan. Thanks for being you.