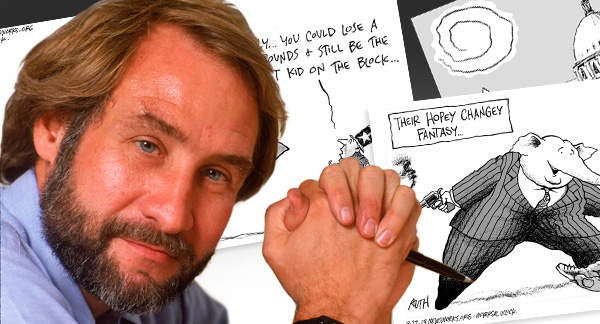 The NCS is sad to note the passing of highly regarded editorial cartoonist William Anthony “Tony” Auth Jr. Tony was best known for having served as an editorial cartoonist for The Philadelphia Inquirer from 1971 to 2012…over 40 years of political cartooning excellence. His other work includes the comic strip Full Disclosure, which he worked on in 1982-83, and the King Features syndicated comic strip Norb, which he drew in 1989 working with writer Daniel Pinkwater. He won the Pulitzer Prize in 1976, was a finalist for that award on two other occasions, and was awarded the Herblock Prize in 2005. Tony passed away of cancer on Sunday, Sept. 14th at age 72.

Tony’s body of work comprises almost 10,000 editorial cartoons, sketchbooks and other pieces. In the last three years he had been working to find a home for his archives, and a special fund has been set up to help preserve his life’s work and keep in in Philadelphia. The National Cartoonists Society Foundation has made a donation to The Tony Auth Fund at the Philadelphia Foundation in his memory. If anyone would like to contribute to this fund and help with the conservation of the work of a terrific cartoonist, visit this link for more information.