Cartoonist Tom K. Ryan, who gave us the syndicated strip Tumbleweeds has passed at the age of 92…actually, about 92.8. His popular western-themed comic made its debut in September of 1965 and lasted until the end of 2007 when Ryan decided he was getting too old to continue it. A run of 42+ years is pretty impressive in any industry. Like most cartoonists, Ryan was aided by occasional assistants, one of whom — a fellow named Jim Davis — did okay for himself when he struck out on his own and created Garfield. 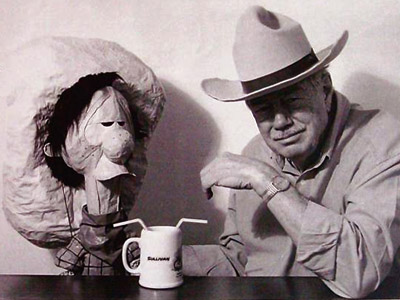 There was a glorious silly air about the feature which was peopled by cowboys and indians in the old west. I don’t recall hearing of any objections to the way the indians were depicted even though the strip lasted into the era when people became more sensitive about that kind of thing. There probably were some complaints but they weren’t so numerous that I heard about any. 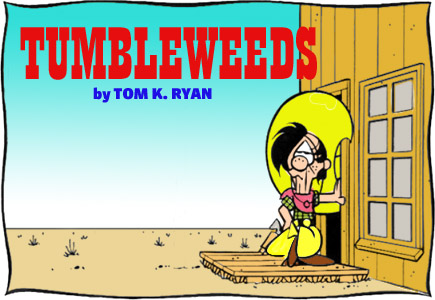 Tumbleweeds was reprinted in many paperback collections and there was a brief appearance on the 1978 Saturday morn cartoon series on NBC, The Fantastic Funnies. To explain that brevity, we go to my pal Buzz Dixon who worked on the show for the Filmation cartoon studio…

Just one Tumbleweeds segment appeared on the air, then it was blotted from the series and memory.

It seems Filmation’s lawyer, when told to acquire the rights to the strip, approached Mr Ryan who said he was interested but wanted to see a storyboard first before granting permissions.

The lawyer came back and told [Executive Producer] Lou Scheimer “He said it’s okay” and so we plunged ahead with production on the segments with yrs trly scripting them (and why not? I was a huge ‘Weeds fan then and now and figured out a cost saving workaround re the show for Lou so of course he let me write ’em).

Tumbleweeds was part of the opening credits and either the first or second segment the week the show aired. The following Monday we got a call from Mr Ryan’s lawyer saying Mr. Ryan liked the show just fine but wondered why nobody ever bothered to offer him a contract…